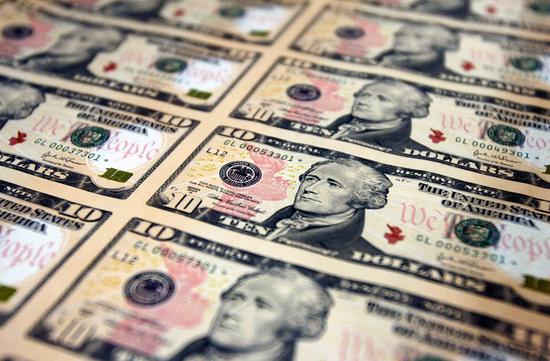 The share of U.S. dollar assets in global central banks' foreign exchange reserves has dropped to a 25-year low, driven by exchange rate fluctuations and central bank actions, according to economists at the International Monetary Fund (IMF).

It marked a 12-percentage-point decline for the U.S. dollar share since the euro was launched in 1999, while the share of the euro has fluctuated around 20 percent, according to the economists.

Meanwhile, the share of other currencies including the Australian dollar, Canadian dollar and Chinese renminbi climbed to 9 percent in the fourth quarter of 2020.

The economists also found that exchange rate fluctuations can explain about 80 percent of the short-term variance in the U.S. dollar's share of global reserves since 1999, while the remaining 20 percent can be explained mainly by active buying and selling decisions of central banks to support their own currencies.

"However, taking a longer view, the fact that the value of the U.S. dollar has been broadly unchanged, while the U.S. dollar's share of global reserves has declined, indicates that central banks have indeed been shifting gradually away from the U.S. dollar," they concluded.

"Some expect that the U.S. dollar's share of global reserves will continue to fall as emerging market and developing economy central banks seek further diversification of the currency composition of their reserves," the economists said, noting a few countries have already announced their intention to do so.