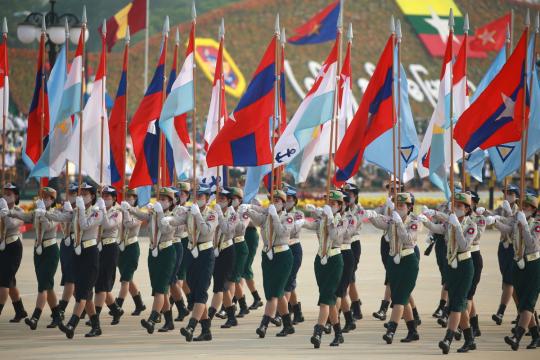 Soldiers march in a formation during a parade to mark the 76th Armed Forces Day in Nay Pyi Taw, Myanmar, March 27, 2021. (Photo/Xinhua)

Noting that the forthcoming special meeting of ASEAN leaders is timely and important, Wang said the Chinese side expects the meeting to play a constructive role in de-escalating the Myanmar situation, send out positive messages and be conducive in three respects:

Firstly, the meeting should be conducive to promoting political reconciliation in Myanmar. Whether the Myanmar issue can be properly resolved mainly depends on the country itself, Wang said, adding that the way out is for all parties of Myanmar to seek new understanding through political dialogues within the constitutional and legal framework and continue pushing forward the hard-won democratic transition.

The Chinese side, Wang said, hopes that the meeting can encourage the Myanmar side to put first the overall interests of the country and the people, and send out signals on peaceful reconciliation, with all concerned parties exercising restraint and moving toward each other.

Secondly, the meeting should be conducive to showing ASEAN's constructive role. Since Myanmar is a member of the ASEAN family, ASEAN knows better than any other countries and regional organizations the special national situation of Myanmar, and has better conditions to participate in its problem-solving in a constructive way, Wang noted.

China expects that ASEAN will stick to the "ASEAN way" featuring unity, inclusiveness and consensus through consultations, build unified ground and make a common voice, so as to further demonstrate to the international community that ASEAN has enough political wisdom and collective will to provide Myanmar with constructive assistance, and has enough political courage to safeguard regional peace and stability, as well as the bloc's solidarity and cooperation, Wang said.

Thirdly, he pointed out that the meeting should be conducive to fending off external interference. Practice has shown that wanton suppression of external forces makes no contribution to solving problems of a country's internal affairs. Instead, it would bring turbulence and even deteriorate the situation, further affecting and disrupting regional stability.

China expects this meeting to make a good start for the "soft landing" of the situation in Myanmar, Wang said, adding that China will continue to support Brunei in fulfilling its duties as the rotating chair of ASEAN, and believes that Thailand, Brunei and other ASEAN countries will play important and unique roles in making the meeting a success.

China will maintain close communication with ASEAN and continue to work with all parties in Myanmar in its own way, Wang said.