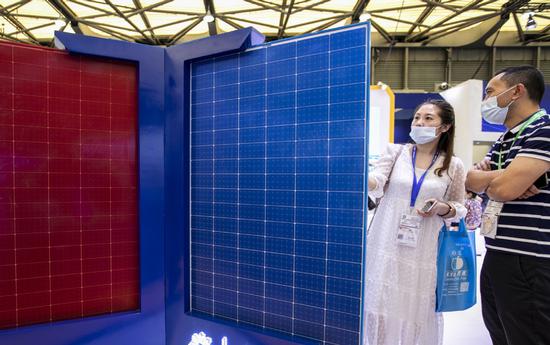 Visitors look at a solar panel during an industry expo in Shanghai.(Photo/China Daily)

Shanghai will actively explore more carbon finance products, position the city as a global center for carbon financing, and look to peak carbon emissions by 2025, officials said on Thursday.

Chen Yin, executive vice-mayor of Shanghai, said during a news conference that the city is formulating an action plan to help achieve the nation's goal of peaking carbon dioxide emissions by 2030, and the plan would be launched later this year.

He said Shanghai will continue to focus on expanding its green finance footprint and achieve laudable outcomes. Several carbon finance products have debuted in Shanghai, and so also a number of key platforms, including the carbon emissions trading market and the national green development fund.

Efforts will be made to create investment and financing mechanisms for meeting the goal of peaking carbon dioxide emissions by 2030 and achieving carbon neutrality by 2060. At the same time, the city will also work to guard against financial risks and follow up on any problems that may arise in the process. The government will actively explore and build mechanisms for financial risk management and better serve businesses in their green transformation, Chen said.

Liu Baokui, deputy director of the Institute of Spatial Planning and Regional Economy at the National Development and Reform Commission, said green finance is an important measure for the 2030 carbon emission goals, and Shanghai is well-positioned to lead the same. Carbon finance products will help optimize the allocation of financial resources and effectively incentivize different industries to lower their carbon emissions.

Vice-Mayor Wu Qing said green finance will be an integral part of the city's financial center plan during the next five years.

At present, 17 of the world's 20 top asset management firms have set up offices in Shanghai, which provides the city with opportunities for international cooperation in green finance development, said Wu.