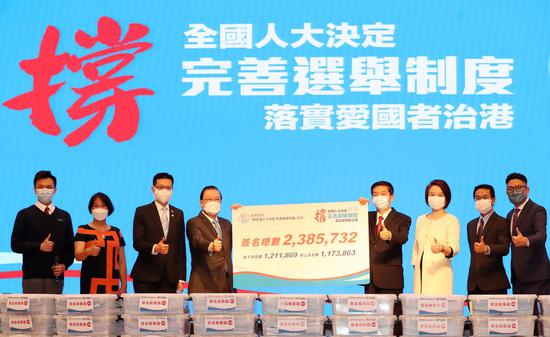 Tam Yiu-chung (4th L), one of the conveners, hands over a petition to Luo Huining (4th R), director of the Liaison Office of the Central People's Government in the Hong Kong Special Administrative Region (HKSAR), in Hong Kong, south China, March 24, 2021. (Xinhua/Li Gang)

Several surveys in Hong Kong showed that the majority of Hong Kong people support the decision of the National People's Congress (NPC) to improve the electoral system of the Hong Kong Special Administrative Region (HKSAR) and believed it will brighten up Hong Kong's prospects.

A number of institutions and organizations in Hong Kong recently conducted surveys to find out the views of various sectors of the society on the decision of the NPC to improve the HKSAR's electoral system.

Local think-tank Bauhinia Institute randomly interviewed 1,366 Hong Kong residents between March 22 and 27, with 69.7 percent of them supported the NPC decision, 66.8 percent agreed with the composition and number of members of the new Election Committee, considering that it can better reflect the overall interests of Hong Kong society.

Hong Kong organization Youth Vision interviewed 1,013 Hong Kong residents between March 22 and 28, with 71 percent of them agreed that the NPC decision should be followed, and 71.1 percent agreed that improving the HKSAR's electoral system is conducive to Hong Kong's prosperity and stability.

The survey done by Youth Vision also found that 65.4 percent of the respondents believed that the inclusion of seats returned by the Election Committee would make the LegCo more broadly representative, 67.6 percent agreed that Hong Kong should set up a candidate qualification review committee, 58 percent agreed that the seats of District Council members in the future Election Committee should be eliminated.