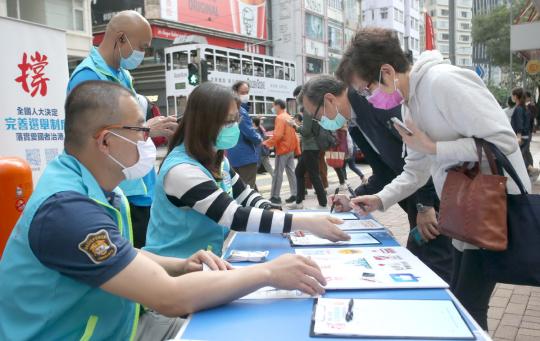 Residents of Wan Chai district in Hong Kong sign on Monday to show support for the draft decision on improving the electoral system, which was approved by the National People's Congress on Thursday. (Photo by Calvin Ng/China Daily)

The decision by the National People's Congress, passed overwhelmingly by deputies on the final day of this year's session, concretely stipulates the changes to the special administrative region's Election Committee, which chooses the SAR's chief executive, as well as the method of election of the city's legislators.

Chief Executive Carrie Lam Cheng Yuet-ngor said that after the loopholes in the electoral system were plugged, the Legislative Council could restore order and Hong Kong society could overcome its divisions. This will allow the city, with the staunch support of the central authorities, to better leverage its advantages to develop the economy and improve the livelihood of its residents.

"The Hong Kong SAR government will spare no effort in continuing to explain to the public about the necessity and urgency of improving the electoral system as well as the solid constitutional basis of the decision," Lam said.

The central government's liaison office in Hong Kong and the Foreign Ministry's commissioner's office in the city said, in separate statements, that the decision provides institutional protection to implement the principle of "patriots administering Hong Kong". It will help maintain the steady development of the democratic system of Hong Kong as well as the long-term security and stability of Hong Kong society, the statements said.

A joint statement issued by 40 of the city's lawmakers said the decision will ensure the orderly operation of Hong Kong's legislature and lay a solid foundation for the healthy development of the city's political institutions.

The Chinese General Chamber of Commerce and the Real Estate Developers Association of Hong Kong said the improvements to Hong Kong's electoral system will provide safeguards for the full implementation of "patriots administering Hong Kong", which is conducive to creating a base for Hong Kong's prosperity.

Meanwhile, it will help enhance the efficacy of governance, enabling the government to focus on developing the economy and continuing to ensure the city's successful role in global finance, shipping, innovation and technology, said the association, which represents the city's major real estate developers.

Also on Thursday, a cross-sector civic alliance was established that plans to organize a series of seminars to explain to residents the necessity of the changes to the city's electoral system.

It launched a citywide signature campaign, offline and online, to gather support for the NPC's decision, and over 100,000 people had signed up to show their support as of Thursday night.

A clerk surnamed Wong, who was constantly worried about street violence during the social unrest in 2019, hoped that after the city established the patriots-led administration via the electoral system improvements, the city would avoid a repeat of what happened in 2019 and its residents would have a better life.

Foreign residents in the city also expressed their support for the changes to the city's electoral system.