China tries to solve challenge of the ages 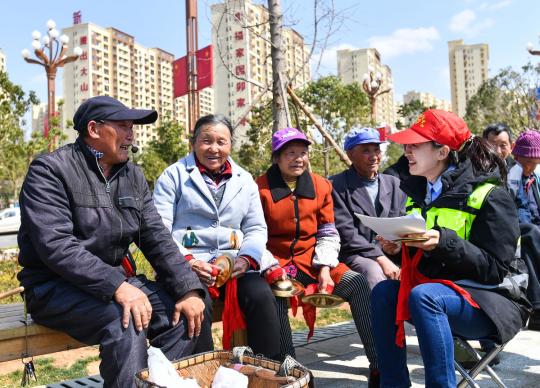 Volunteer Zhang Wei (right) sings with senior residents on a public green in a resettlement community for impoverished families in Nudian, Yunnan province, on March 4. (Photo/Xinhua)

As birthrates decline and the number of seniors increases, the nation is contemplating its policy options

With the number of births expected to continue falling in China, experts have called for further policy improvements to ease the impacts on social and economic development caused by an aging population and shrinking workforce.

Demographics have been a major topic of discussion during the ongoing two sessions－the annual meetings of the National People's Congress, the top legislative body, and the National Committee of the Chinese People's Political Consultative Conference, the leading political advisory body. Proposals made range from adjusting the family planning policy to offering tax breaks to encourage couples to have a second child.

In a blueprint released last year mapping the country's development over the next five years and beyond, China's top leadership listed improving family planning to promote balanced population development as a key task of the national strategy to tackle an aging population.

Major measures include developing affordable nursery services, reducing the cost of child raising and education, and boosting elderly care industries and services, according to the blueprint.

The official number of births for last year has not been released yet; however, it has fallen in recent years despite the implementation of the universal second-child policy at the beginning of 2016.

In 2019, there were about 14.7 million births on the Chinese mainland, a drop of more than half a million over the previous year. It was the third consecutive year of falling births since 2016, according to the National Bureau of Statistics.

Meanwhile, the birthrate dropped to 10.48 per 1,000 people last year, the lowest level in seven decades. Many experts believe the trend will continue for the next few years at least, and a population decrease is inevitable.

Yuan Xin, a professor of population studies at Nankai University in Tianjin, expects the number of births last year on the mainland will have fallen again.

"The number of births last year will not exceed the level for the previous year, judging by factors such as people's decreasing willingness to have children, the fertility rate and the dwindling number of women of childbearing age," he said. If the trend continues, China will start to see a decrease in its population sometime between 2025 and 2030, Yuan said.

By the end of the century, the fall could be as drastic as 50 percent from the current level. Under such a projection, China would be the third-most populous nation behind India and Nigeria, according to a study published in the medical journal The Lancet in July.