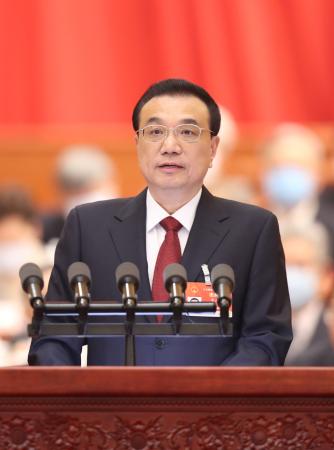 Premier Li Keqiang delivers a government work report at the opening meeting of the fourth session of the 13th National People's Congress at the Great Hall of the People in Beijing, capital of China, March 5, 2021. [Photo/Xinhua]

China said on Friday it aimed for a robust return to economic growth of over 6 percent, a target that experts said is "well within China's capacity" and positive to global economic recovery.

"In setting this target, we have taken into account the recovery of economic activity," Chinese Premier Li Keqiang said at the opening of the annual legislative meeting. "A target of over 6 percent will enable all of us to devote full energy to promoting reform, innovation, and high-quality development."

Douglas H. Paal, senior researcher of the Asia Program at the Carnegie Endowment for International Peace, said China's growth aim for 2021 is "reasonable" against last year's level, which, standing at 2.3 percent, made China the world's only major economy registering positive growth amid the global COVID-19 pandemic.

"It indicates a return to normal, and it will be a plus for the global level of economic growth," Paal told China Daily.

He added that the target is quite "feasible, and well within China's capacity".

The International Monetary Fund, in its World Economic Outlook update released in late January, predicted the world could achieve 5.5 percent growth in 2021, while China's economy will grow at 8.1 percent this year, built on its effective pandemic-containment measures and policy support.

"With this target, China will be the fastest growing large economy in the world, essentially an engine of growth for everyone else," said Gary Hufbauer, a senior fellow and trade expert at the Peterson Institute for International Economics. "That would be good news," he said.

In the Government Work Report, Li said that domestically, there are still "weak links in our work to control Covid-19", and the foundation for achieving the country's economic recovery needs to be further consolidated, impediments to consumer spending remain, and investment growth lacks sustainability.

Hufbauer said that among the many measures to be taken, the country should remain cautious against the possible occurrence of clusters of COVID-19 cases.

"To achieve 6 percent or better, China will need to step up its vaccination program, and vaccinate at least half the population by summer," he said. "This is a logistical challenge, but achievable."

On international trade, Li said the country would "promote the growth of mutually beneficial China-US business relations on the basis of equality and mutual respect".

In January, the US trade gap with China fell 3.2 percent to $27.2 billion while its overall trade deficit increased by 1.9 percent on record goods imports as the coronavirus pandemic continues to distort global commerce, the US Commerce Department reported Friday.

The Biden administration has not yet rolled out a trade policy with China, but said it is "ready to work with Beijing, when it's in America's interest to do so".

In 2019, exports to China supported 1.2 million jobs in the US and as of 2018, 197,000 people in the US were directly employed by Chinese multinational firms, according to a report the US-China Business Council released in partnership with the Oxford Economics in January.

"With China forecast to drive around one-third of global growth over the next decade, maintaining market access to China is increasingly essential for US businesses' global success," the report said.