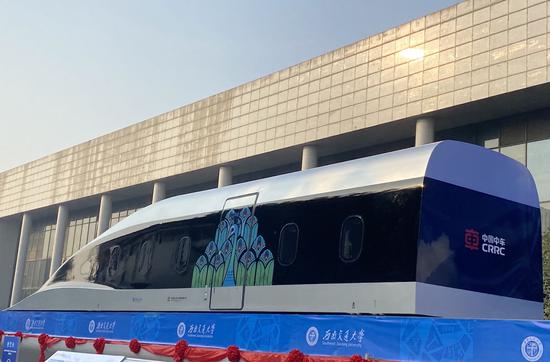 A prototype locomotive using high-temperature superconducting (HTS) maglev technology was rolled out on Wednesday in southwest China's city of Chengdu.

The domestically developed maglev train boasts a designed speed of 620 kph, according to Southwest Jiaotong University, one of the train's designers.

A 165-meter line to test the new train was launched on the same day.

At the launch ceremony, the 21-meter-long locomotive was seen floating slowly along the track. Experts hailed the key development of HTS technology emerging from lab tests in China.

"Although the theory sounds good, everyone saw it (HTS maglev technology) as a lab toy in the past, without tests in a real situation," said Deng Zigang, deputy director of the university's research center for super-high-speed maglev transport in low-pressure tubes.

Compared with other maglev technologies, HTS tech is more suitable for the futuristic concept of superfast transportation in vacuum tubes, where trains could hit speeds of over 1,000 kph, according to experts.