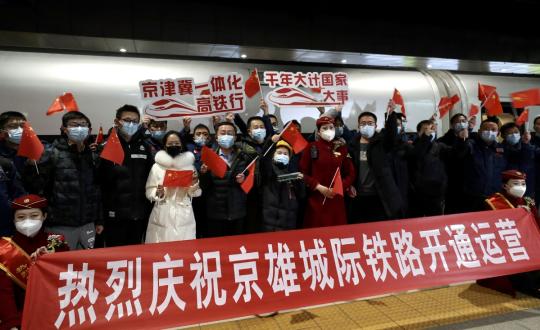 Pang Qinggang, from Xiong'an New Area in Hebei province, was excited to take the maiden trip on an intercity high-speed railway on Sunday morning to Beijing, in order to experience the "unprecedented convenience" offered by the new service.

Pang bought a ticket for Train C2702 shortly after its booking service opened on Saturday.

Before the operation of the intercity train, it would take him over two hours to drive from his hometown to the capital. Now, the journey takes just 50 minutes.

Xiong'an, which spans Rongcheng, Anxin and Xiongxian counties and some adjacent areas, is a new economic zone located about 100 kilometers southwest of the capital and is aimed at becoming a national model of high-quality development and a new engine for the modern economic system.

The rail line is the first key transport facility involving Xiong'an that has been constructed since April 2017, when the new area was established.

The construction of the intercity high-speed railway started in February 2018. It's one of the key railways that will link the country's "city of the future" with places all over the country.

"The line, together with Xiong'an Railway Station, has great significance in preparing Xiong'an for taking over non-capital functions from Beijing and in helping to build it into a high-quality modern socialist city," said Wang Dongfeng, Party secretary of Hebei.

He visited Xiong'an Railway Station, also a new transport facility in the area, and attended an opening ceremony for the line in the station on Sunday morning.

Wang said that the opening of the line and the station in Xiong'an mark a milestone in the planning and construction of the area.

Xiong'an is expected to play an important role in the national strategy of the coordinated development of the Beijing-Tianjin-Hebei region.

The line is about 91 km in length, according to China State Railway Group, and there are four stops on the line between Beijing and Xiong'an, including a station at Beijing Daxing International Airport.

The highest designed speed on the line is 350 km per hour, the group said.

The section from Beijing West to Daxing airport has been in operation since September last year, with the journey taking about half an hour.

"Since then, 220,000 trips have been made on the line," Song Tingting, head of the Office of the Beijing West Railway Station, said on Sunday.

After the section from Daxing airport to Xiong'an opened, there are now 11 pairs of high-speed trains running on the rail line, Song said.

The number of trains will be increased in accordance with passenger growth, she added.

From Daxing airport to Xiong'an, the fastest train journey will be just 19 minutes, according to online railway ticket-booking platform 12306.cn.

According to an official planning guideline for the development of Xiong'an, the area will be a junction for high-speed railways in the future.

The high-speed railway network where Xiong'an sits will contain four vertical lines, running south to north, and two horizontal lines, including the major line from Beijing to Guangzhou, Guangdong province.

"In terms of the new line itself, more than 70 innovative solutions have been applied in its construction and management," said Kang Xuedong, deputy chief engineer at China Railway Design Corp.

"It's the first time in our country to use building information modeling technology in designing a whole railway," Kang said, pointing out that this technology can improve design quality and efficiency by transforming two-dimensional drawings into three-dimensional models.

In addition, a totally prefabricated bridge was used for the first time in the railway sector, he said. Prefabricated constructions are built with parts made in a factory so that they can be easily carried and assembled.