Ministry: Australia's stance 'a travesty of freedom and democracy' 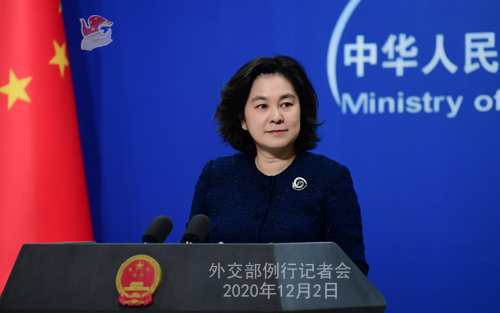 Foreign Ministry spokeswoman Hua Chunying said on Wednesday that the reason Australia and some people in the United States felt outraged about a graphic related to Australian soldiers' murderous behavior in Afghanistan is because they don't think the Chinese people have the right to comment on it.

She made the remarks after Australian Prime Minister Scott Morrison said that Australia will remain true to its values and protect its sovereignty, and US State Department deputy spokesman Cale Brown accused China of spreading disinformation.

While the graphic was created with computer techniques by a young Chinese author based on facts from the Australian Defense Department's report, Hua said that pictures and images of the Australian soldiers' atrocities in Afghanistan are even more horrifying.

"So how can the Australian side and some people in the US accuse China of falsifying photos and spreading false information?" Hua said.

The spokeswoman also questioned what values are being talked about by the Australian side.

"On the one hand, you attack and smear others; on the other hand, you won't allow anyone else to talk about your atrocities with solid evidence. Does that conform with Australian national values?" Hua asked.

In response to the US spokesman's accusation that China covers up "human rights abuses", Hua said the accusation is the lie of the century concocted by anti-China forces in Australia, and the US played a dishonorable role in it.

According to Hua, the Australian Strategic Policy Institute, which receives funds from the US, has absurdly said that all walled buildings in the Xinjiang Uygur autonomous region are detention centers, but these facilities are for civil purposes, such as administrative buildings or schools.