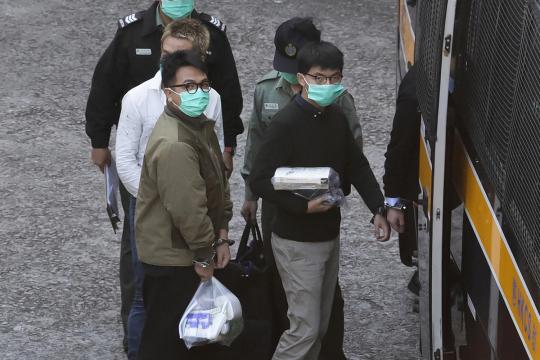 Ivan Lam Long-yin (left) and Joshua Wong Chi-fung get into a prison vehicle, after they pleaded guilty to charges of organizing and taking part in an unauthorized assembly near the Police Headquarters in Wan Chai during last year's protests, at Lai Chi Kok Reception Centre, Hong Kong, on Wednesday. (Photo by CALVIN NG/CHINA DAILY)

A Hong Kong court sentenced activist Joshua Wong Chi-fung and two of his associates to up to 13.5 months in jail on Wednesday for their roles in a 15-hour siege of the Hong Kong Police Headquarters in June.

Local legal professionals said that the jail sentences are "appropriate" but more "lenient than expected".

Wong was sentenced to be jailed for 13.5 months for organizing and inciting an unlawful assembly near the Police Headquarters on June 21, 2019. Agnes Chow Ting was sentenced to a 10-month jail term for inciting and participating in the same incident. A third defendant, Ivan Lam Long-yin, received a seven-month jail sentence for one count of incitement.

On passing down the sentence, Magistrate Wong Sze-lai of West Kowloon Magistrates' Courts, said that immediate incarceration is "the only appropriate sentencing option".

The court's decision, simultaneously an open condemnation and a deterrent, should make it clear to the public that unlawful activities are not allowed to disrupt public order, according to the judge.

On June 21, 2019, the trio incited more than 400 protesters gathering in Admiralty to march toward the Police Headquarters in Wan Chai. As many as 9,000 people surrounded the headquarters at one stage, causing 61 emergency calls from local residents to go unanswered and keeping six police officers trapped in a police van for three hours.

During the large-scale unlawful assembly, Wong had actively taken the lead role and coordinated the demands of the protesters with Chow's assistance, the judge noted.

Wong's appeal to besiege the Police Headquarters was aimed at challenging the authority of the police, who are the backbone of maintaining social order and security, the judge said.

Lawrence Ma Yan-kwok, chairman of the Hong Kong Legal Exchange Foundation said the sentences are within the proper range, but "more lenient than he expected". Yet, the barrister believes these jail sentences will have a strong deterrent effect on these lawbreakers' followers.

Willy Fu Kin-chi, a law professor at Beijing Jiaotong University said he thinks the sentences fall short as deterrents, as they don't reflect the seriousness of the cases and the negative impact of the defendants' behavior.