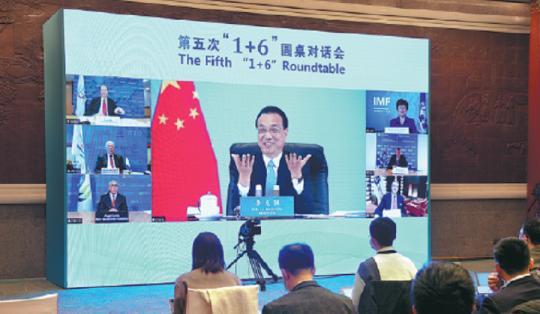 Premier Li Keqiang participates in the Fifth"1 6" Roundtable via video link in Beijing with the heads of six major economic organizations on Tuesday. (Photo by FENG YONGBIN/CHINA DAILY)

China will secure positive growth in its economy this year, and the country is aiming to restore its economic development to a reasonable range next year, Premier Li Keqiang said on Tuesday.

In remarks made at a news conference after the Fifth "1 6" Roundtable via video link in Beijing, Li pledged to maintain the consistency and stability of China's macroeconomic policies and continue with a proactive fiscal policy, prudent monetary policy and an employment first policy going forward.

The government will enhance the consistency and efficacy of macro policies, enrich the policies' content and refine the mix of policy tools based on the dynamic situation, he said.

Li's remarks came as China's economic recovery gathered momentum in recent months, with retail sales growing by 4.3 percent in October on a yearly basis, up from 3.3 percent in September, according to the National Bureau of Statistics.

The purchasing managers index for the manufacturing sector stood at 51.4 in October－marking the eighth consecutive month in which China's factory activities stayed in expansionary territory, according to the NBS.

Li highlighted the resilience of China's market players, numbering over 100 million, as the strongest underpinning for the country to cope with difficulties and challenges.

The country's market players and the Chinese people have shown strong resilience in the face of the fallout from the pandemic, and have been the strongest support for the country's economic fundamentals, he said.

China added 10.09 million new jobs in urban areas in the first 10 months of this year－reaching its preset target for job creation for 2020 two months ahead of schedule－with the surveyed urban unemployment rate standing at 5.3 percent in October.

Li also highlighted the importance of the Regional Comprehensive Economic Partnership, saying that the signing of the world's largest trade pact will help promote economic globalization and trade liberalization.

The RCEP is an open and inclusive trade pact that not only belongs to its 15 participating countries but also welcomes more nations to join, he said, adding that the rules of the RCEP are in alignment with those of the World Trade Organization and serve to reinforce other regional free-trade arrangements and the multilateral trade mechanism.

Georgieva said China's fast economic recovery is based on resolute measures in combating COVID-19, mitigating its impact and supporting growth.

"With the right mix of supportive macroeconomic policies focused on strengthening social safety nets and further key reforms, China will secure its recovery and ensure balanced, high-quality growth that benefits China and the world," she said.

Under the theme of "Promoting World Economic Recovery and Growth in the Post-COVID-19 Era", the participants had an in-depth exchange of views on topics including the world economic landscape, global economic governance beyond COVID-19, and China's economic situation and trends.