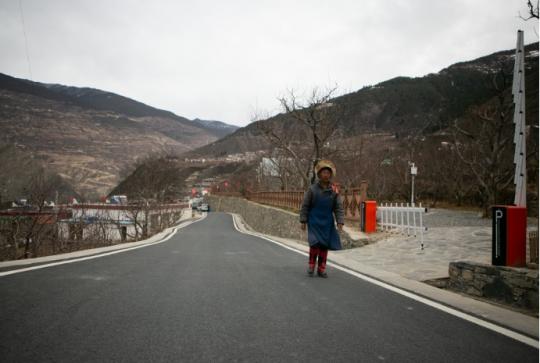 A villager walks on an asphalt road in Xiaojin county, Aba, Sichuan, in January. (LI MENGXIN/XINHUA)

A network of more than 1.4 million kilometers of roads connecting rural areas is expected to be completed by the end of this year as an important means to eradicate poverty across China, Transport Minister Li Xiaopeng said on Thursday.

During the plan period, the central government was expected to invest more than 950 billion yuan ($142 billion) to build roads in rural areas. The money accounts for about 68 percent of the revenue from the country's vehicle purchase tax, Li said.

"The rural road network has made accomplishments, bringing popularity and wealth to the countryside, especially the poor areas, and also building public support for the Party at the grassroots level," Li said.

China's transportation sector has made strides in the past, Li said, with the length of high-speed railways, freeways and urban rail networks all ranking top in the world.

From 2016 to the end of this year, China is expected to achieve 16 trillion yuan of fixed asset investment in transportation.

Large-scale transport projects, such as the Hong Kong-Zhuhai-Macao Bridge and the Beijing Daxing International Airport, were built, marking significant progress in the nation's technology development and its ability to handle transportation infrastructure projects.