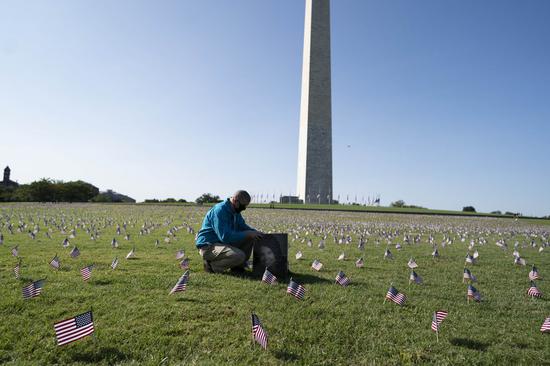 A man is seen with a picture of his family member who died from COVID-19 among U.S. national flags representing the 200,000 lives lost to COVID-19 in the United States placed on the National Mall in Washington, D.C., the United States, on Sept. 22, 2020. (Xinhua/Liu Jie)

U.S. faltering response to the COVID-19 pandemic has resulted in 130,000 to 210,000 deaths that could have been avoided, according to a report from the Columbia University.

"Through comparative analysis and applying proportional mortality rates, we estimate that at least 130,000 deaths and perhaps as many as 210,000 could have been avoided with earlier policy interventions and more robust federal coordination and leadership," said the report released Wednesday by the Columbia University Earth Institute's National Center for Disaster Preparedness.

The report looked at the staggering and disproportionate nature of COVID-19 fatalities in the United States to estimate how many deaths were "avoidable."

Over the past nine months, the United States witnessed an alarming jolt of vulnerability and anguish, as the novel coronavirus pandemic wrought immense suffering and confusion in a country that only last year topped an international ranking of epidemic preparedness, said the report.

With more than 217,000 lives lost, the United States turned a global crisis into a devastating tragedy, said the report.

Even with the dramatic recent appearance of new COVID-19 waves globally, the abject failures of U.S. government policies and crisis messaging persist, said the report.