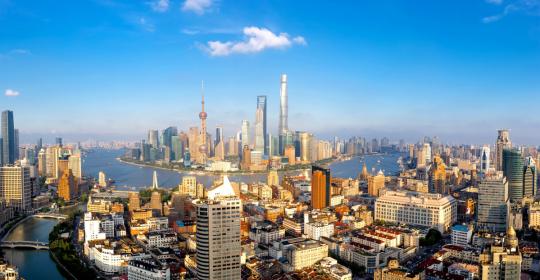 Highrises dominate the skyline on both sides of the Huangpu River in Shanghai. [Photo by Gao Erqiang/China Daily]

China's third-quarter economic growth has cheered up overseas professionals and observers, who believe that the country's growth is picking up steam and will inspire more confidence in the global economic recovery.

The country's gross domestic product growth registered a decent rate of 4.9 percent year-on-year in Q3, a further expansion following the second quarter's 3.2 percent, as COVID-19 has been tamed and activities normalized amid growing domestic demand and consumption thanks to the government's strong stimulus measures.

Given the country's boisterous Golden Week holiday at the start of October, Iris Pang, chief economist for Greater China at ING, told CNN that the uptick in domestic travel and spending has helped create jobs for low-skilled workers in the labor market, which has helped stabilize consumption even more.

In the first three quarters, China's GDP expanded 0.7 percent year-on-year, returning to growth after a 1.6 percent contraction in the first half of the year and a 6.8 percent slump in Q1.

"That China was able to grow as fast as it did given the weakness all across the rest of the global economy right now, is quite remarkable," CNBC quoted Steve Cochrane, chief APAC economist at Moody's Analytics, as saying.

Eswar Prasad, a professor of economics at Cornell University, also told CNBC that China's latest GDP print is "stunning" when the rest of the world is in a "dire" recession due to the pandemic, adding that China will remain important for demand in the Asian region.

"China's economy is back-ish and the world can exhale. Without this rebound, the nascent global recovery would be on even thinner ice," Bloomberg said in an opinion piece.