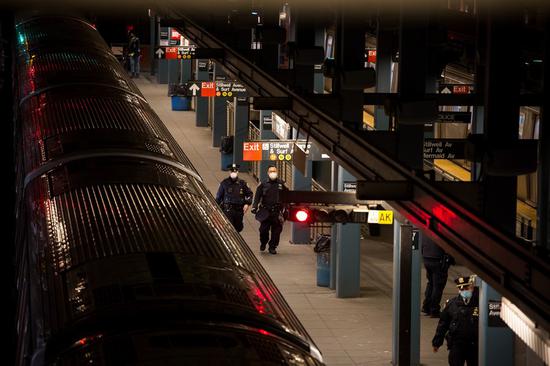 Police officers patrol on a platform at a subway station in the Brooklyn borough of New York City, the United States, May 6, 2020. (Photo by Michael Nagle/Xinhua)

The New York Police Department is forming an Asian Hate Crime Task Force, its first-ever task force dedicated to investigating crimes targeting a single race, according to an article published on The Wall Street Journal on Monday.

The group consists of 25 detectives of Asian descent who speak a combined nine Asian languages. The group's task is to guide victims through the justice system, from reporting a crime all the way to prosecution, the NYPD said, adding that the city has seen a rise in hate crimes directed at Asian people since the coronavirus pandemic began and it will remain after the pandemic.

NYPD logged 23 incidents of coronavirus hate crimes, a separate category created this year to track crimes targeting someone for their identity based on the perception that it has something to do with COVID-19. All but one targeted New Yorkers of Asian descent, the article said.

According to the article, coronavirus-related hate crimes have occurred in neighborhoods in all five boroughs of the city except Staten Island, NYPD data showed. Manhattan has experienced the most, with 13 incidents, followed by five in Brooklyn, three in Queens and two in the Bronx. Arrests have been made in 15 cases.