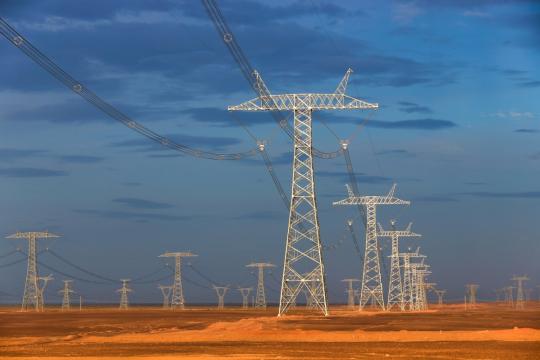 A view of the transmission line project in the Xinjiang Uygur autonomous region. (Photo by Liu Wenlong/for chinadaily.com.cn)

The level of electrification in China's rural areas has significantly improved in recent years, with more rural residents having access to cleaner energy options, as a result of China's relentless and long-running poverty-alleviation campaign.

Clean energy accounted for 21.8 percent of total energy consumption in China's rural regions in 2018,8.6 percentage points higher than in 2012, Zhang Jianhua, head of the National Energy Administration, said at a news conference in Beijing on Monday. Electrification in China's rural regions has reached 18 percent, 7 percentage points higher than in 2012.

"The northern rural region's shift from coal to cleaner energy for heating has not only improved air quality but also boosted infrastructure construction in rural regions and improved local residents' quality of life."

According to Zhang, energy development and construction has not only brought greater access to power in poverty-stricken regions but has also created more employment opportunities.

Electric power development in rural regions has been the priority task in poverty alleviation, and it is necessary to transform its advantages in resources, including coal and natural gas, into favorable economic conditions, he said.

As part of poverty alleviation efforts, the country has set up solar power stations with a total installed capacity reaching 26.36 million kilowatts that has benefited 4.15 million households in 60,000 villages. The annual power generation income has reached 18 billion yuan ($2.68 billion), which has also created 1.25 million jobs, he said.