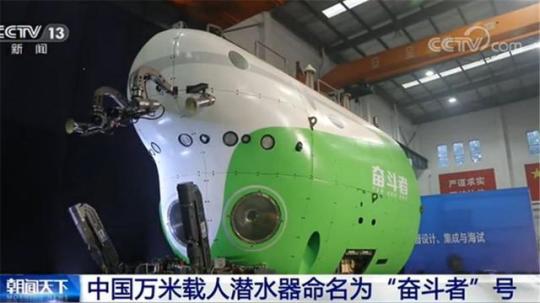 China's latest manned submersible is expected to explore the deepest part of the ocean-the bottom of the Mariana Trench in the Pacific Ocean.

The submersible, named Fendouzhe, or "striver", will make its first attempt to carry its crew to approach the Challenger Deep-the deepest point in the trench-before the end of this year, according to sources at the China Ship Scientific Research Center in Wuxi, Jiangsu province. The center is a subsidiary of the State-owned shipbuilding conglomerate China State Shipbuilding Corp.

The electrically powered submersible, which weighs tens of metric tons, was assembled at the center in March. It conducted some tests in a lake in Wuxi before being transported to a shipyard in Fuzhou, Fujian province, in July to be loaded onto its mother ship, Exploration 2.

The mother ship then carried the craft to Sanya, a coastal city in Hainan province, to make some preparatory dives in the South China Sea ahead of its maiden journey to the Mariana Trench.

Fendouzheis the world's deepest-diving manned submersible, capable of bringing people to 10,000 meters underwater to perform scientific missions, sources said, noting that almost all of the vehicle's technologies and apparatuses were developed by Chinese researchers.

Designers and engineers overcame many technical difficulties to build the submersible's sophisticated equipment, including the titanium alloy-based pressure sphere holding the crew and the ultra-deep communication devices.

Once the craft begins formal operations with the Chinese Academy of Sciences, it will carry three crew members in each deep-diving operation, which can last as long as 10 hours. Excluding the time for ascents and descents, the crew will be able to carry out around two hours of scientific tasks at a depth of more than 10,000 meters, designers said.

Currently, the nation operates two manned deep-sea submersibles-Jiaolong, or "sea dragon", and Shenhai Yongshi, or "deep-sea warrior". Both of them were designed and built by the country's engineers.

Jiaolongentered service in 2010, making China the fifth country in the world to have deep-sea exploration technology after the United States, France, Russia and Japan. During a test dive in June 2012, it reached its deepest depth-7,062 meters-in the Mariana Trench.

With a 4,500-meter diving capability, Shenhai Yongshiwas delivered to the Chinese Academy of Sciences in late 2017 and is involved in intensive scientific operations.

In the long term, China plans to build a manned deep-sea station that will start operating around 2030, according to officials at the State Oceanic Administration.