US, UK both criticized for excluding Chinese firms 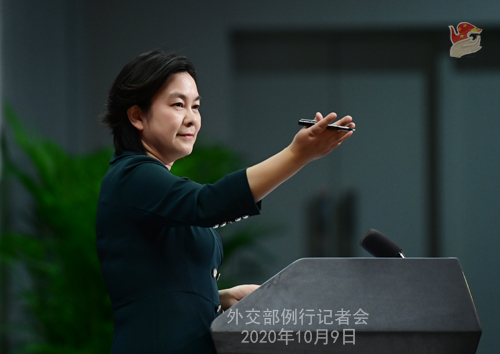 Foreign Ministry spokeswoman Hua Chunying on Friday slammed recent remarks made by US officials, including US Secretary of State Mike Pompeo, accusing China of coercing other countries.

"I've read relevant reports. Speaking of coercion, I think the international community will first think of the United States," Hua told reporters at a regular news briefing in Beijing.

For some time, some US politicians have been going around the world pressuring other countries, including allies, to follow suit on various issues, hype up ideological confrontation, try to tie other countries to their anti-Communism and anti-China chariot and even arbitrarily threaten to resort to sanctions, she said.

Speaking at a meeting in Tokyo with the foreign ministers of Japan, India and Australia on Tuesday, Pompeo called on the four countries to collaborate to protect their people and partners from "the Chinese Communist Party's exploitation, corruption and coercion".

"So many countries have felt deeply about some US politicians' motto that whoever stands with the US shall prosper and whoever doesn't shall perish," Hua said.

She noted that some US politicians may have forgotten that it's already the 21st century and all countries－regardless of their size－are all equal, and bullying and power politics will never have results.

The spokeswoman said that China is not the country who coerces others, makes confrontation or tries to sow discord.

"We believe that more countries will stick to their principles and make independent choices that serve the interests of their own people and countries," she said.

Also at the news briefing, the spokeswoman said that some in the United Kingdom are getting in line with the US in discriminating against and excluding Chinese companies without any solid evidence and under the excuse of nonexistent risks.

"This blatantly violates market economy principles and free trade rules, severely damages the legitimate interests of the Chinese company and erodes the mutual trust underpinning China-UK cooperation," Hua said, adding that therefore China was highly concerned about the openness and safety of foreign investment in the UK market.

State Councilor and Foreign Minister Wang Yi will pay official visits to Cambodia, Malaysia, Laos and Thailand and pay a transit visit to Singapore from Sunday to Thursday, Hua announced on Friday.

Wang expects to actively promote exchanges and cooperation with relevant countries amid regular COVID-19 prevention and control measures to help their economic recovery and social progress and promote China-ASEAN ties to a new level, Hua said.

"We hope and believe that ASEAN countries will continue to work with the Chinese side to firmly safeguard multilateralism and international justice and fairness, maintain regional peace and stability and make the region an oasis of peace and a leading area of development," she added.