Moon bathes festival in its glow 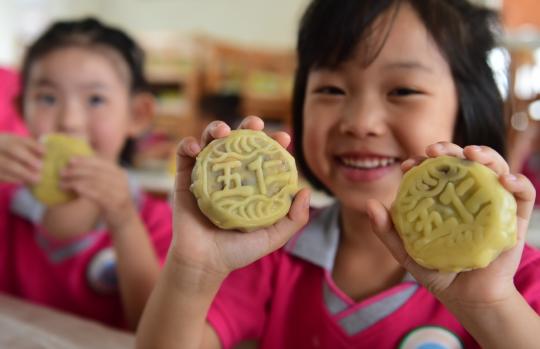 Traditions have changed over time, but one aspect remains constant

Each year during the Mid-Autumn Festival, residents from Dawulei village in Wuxue, Hubei province, gather in front of the main ancestral hall to make offerings to the moon.

When the moon rises in the night sky, the ceremony, which has 21 steps divided into five stages, begins in earnest.

More than 60 male villagers, most of them from the Lei clan, parade in colorful masks and white silk pants and robes while carrying staffs topped with white lanterns.

They circle a small lake in front of the ancestral hall, with the lamps held aloft and the white orbs reflected in the water.

A key part of the ceremony involves a village leader daubing a red flag and a black flag with blood drawn from a live chicken and making an offering to the ancestors.

Onlookers bow their heads and pray silently. As the ceremony reaches its finale, female villagers dressed in gold and red join hands and dance joyfully in a circle. At the end of the dance, spectators run to collect mooncakes and fruit that have been tossed in the air by village leaders.

The elaborate ceremony is how Dawulei celebrates the festival and gives thanks for its harvest.

The village's Mid-Autumn Festival rituals date to the Qing Dynasty (1644-1911). The ceremony is held each year, and a large-scale version is staged every five years or whenever there has been a bumper harvest.

The village ceremony was scaled back after 1945 but was resumed in full in 2009.

Xiao Fang, a professor of folklore at Beijing Normal University's School of Sociology, said the ceremony showcases many aspects of Chinese culture, such as honoring ancestors and showing respect for seniority.

"It's an opportunity for the Lei clan to enhance cohesion in the village," Xiao said.

From elaborate rituals to eating mooncakes, Mid-Autumn Festival customs have gradually changed over recent centuries. However, the modern version of the holiday still includes traditions and rituals that date back thousands of years, according to Xiao.

The holiday is also known by other names that reflect its agrarian origins and the celebration of harvest time, such as the fruit, pumpkin, moon and reunion festivals.

"Traditional Chinese culture has a unique relationship with the moon, and the moon is always a symbol of gentleness and light," Xiao said.

In the Sui (581-618) and Tang (618-907) dynasties, it became fashionable for writers to expound on the qualities of the moon, and royal households' exclusive hold over paying homage to the celestial body faded.

During the Song Dynasty (960-1279), both rich and poor worshipped the moon, and children were allowed to dress as adults and burn incense as an offering. Male scholars prayed for good results in the imperial examinations, while young women asked to be blessed with beauty.

"In the Ming (1368-1644) and Qing dynasties, worship of the moon changed significantly and the god of the moon gradually became an icon, especially for females," Xiao said, adding the god took various names and forms.

According to Xiao, Chinese ethnic groups also have their own moon-worshipping customs and rituals.

The Oroqen ethnic people from Northeast China put a basin of water on the ground and set tributes around it, while people from the Tu ethnic group in Qinghai province use a tub of water to "collect" the reflection of the moon. 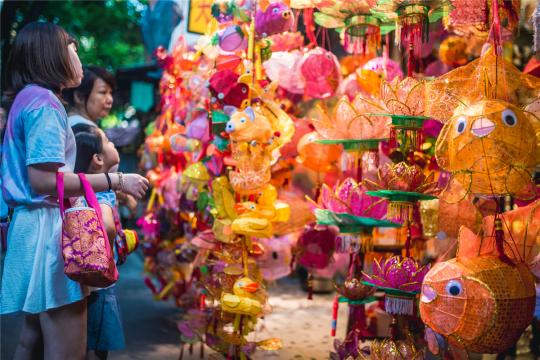 Zhang Bo, a folklore researcher at Beijing Union University, believes Mid-Autumn Festival originated in the Tang Dynasty, while other scholars, including Xiao, argue it became a folk festival during the Song Dynasty.

Both sides agree that the custom of paying tribute to the moon on the 15th day of the eighth month of the lunar year started in the Tang Dynasty.

However, they are split on when and how it officially became a public festival.

Zhang said in the Quan Tangshi (Complete Tang Poems), which was commissioned in 1705, scholars have counted 111 poems with references to Mid-Autumn Festival.

"Besides descriptions of the beauty of the moon and moonlit nights, many of the poets express emotions through the notion of the moon," Zhang said.

She said the poets were anxious and sad about life being short, and used the fleeting time of a full moon as a metaphor.

"They thought about life and death, and as a result they turned to the skies to encourage us to cherish the present," she said.

Zhang said during the Tang Dynasty there was an expression "to play with the moon" which implies pure entertainment, however, writers and thinkers used it as a metaphor to express deeper ideas.

Xiao said in the Song Dynasty it was common for people to compare phases of the moon to changes in human relationships. The importance of family reunions at this time of year also spread during the Song Dynasty. 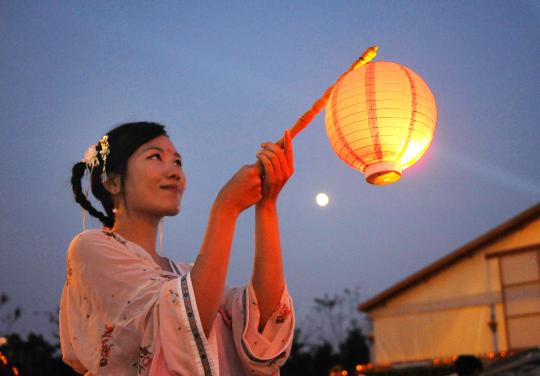 While Chinese people's celebrations might be the most famous, rituals to mark mid-autumn are held in many other countries.

According to Xiao, the native people of Canada burn incense when the moon is full. On Zanzibar Island off Africa's east coast, they have an annual full moon festival during which villagers sit around watching the orb and dance throughout the night.

Mid-autumn is also celebrated in South Korea and Japan, as well as in Southeast Asian countries such as Vietnam, Singapore, Malaysia and Indonesia.

The festival is called Chuseok in South Korea, and is one of the country's biggest holidays. On Chuseok Day, a family's eldest son honors deceased ancestors, while young girls wear colorful traditional clothes and play games.

To celebrate a good harvest, they visit their ancestral hometowns and share a feast and rice wine. Muffins in the shape of half moons made from rice flour with jujube paste filling are the traditional holiday food.

In Japan, the festival is called Tsukimi or Otsukimi, which literally means "moon-viewing". The Tsukimi custom originated from China after Mid-Autumn Festival was introduced to Japan 1,000 years ago.

In Vietnam, the festival is for children. Adults tell children stories and the youngsters carry lanterns and wander and play under the moon. 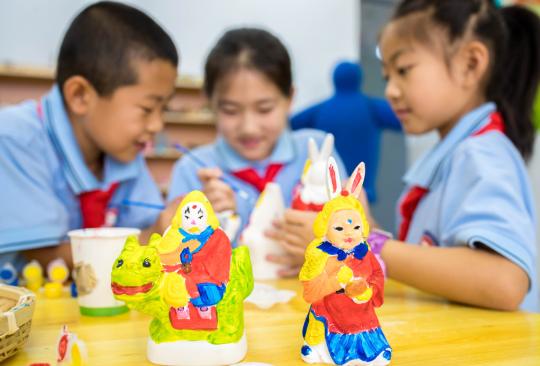 In China, family reunions and celebrating the harvest aren't the only popular traditions during Mid-Autumn Festival.

Praying for marriage and children is not uncommon. But on the first night of the festival, people in Hubei and Hunan provinces "steal" melons from fields and give them to married couples as a blessing to have children.

Dong ethnic people who live in Hunan and Guizhou provinces steal vegetables under the bright glow of moonlight, which is meant to bring them happiness for the year.

Mid-Autumn Festival is also a time to settle debts and pay wages. "It's an important time for accounting, and it's also the day when some bosses decide to renew or stop employees' contracts," Zhang said.

Colorful games and competitions for children are also part of the Mid-Autumn Festival celebrations, she said.

Lanterns are popular with children. In Guangdong province and the Guangxi Zhuang autonomous region, the lanterns are made from grapefruits. In Weifang, Shandong province, children play by the light of incense sticks tied with sweet wormwood.

Zhang said where the full moon is observed from is also very important. "Places that have a clear view are considered ideal, such as on a mountain, in a boat and next to the river," she said.

"The full moon not only guides people on when to reunite and celebrate Mid-Autumn Festival, it also provides spiritual consolation for people who are separated."

Just as the moon waxes and wanes and people meet and say goodbye, optimism can be drawn from seeing the same full moon no matter where you are, Zhang said. 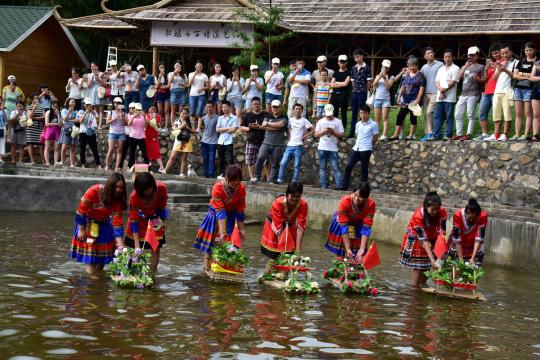 The custom of giving mooncakes during the festival became popular in the Ming and Qing dynasties and persists today. Mooncake Festival is a more popular name for the holiday in some places in China.

Wang Xifu, 84, a master pastry maker, said in the Qing Dynasty, there was no distinction between what wealthy and ordinary people ate during Mid-Autumn Festival.

"Both the imperial and ordinary families ate mooncakes," he said. "For ordinary people, it was a festival to express their wishes, not to the moon but to Tu'er Ye (the rabbit god) or Chang'e whose legends are related to the moon."

Wang said eating mooncakes was a way to express yearning for absent loved ones and the hope for a better life.

Wang comes from a long line of cooks. His grandfather was a chef for the emperor in the Qing Dynasty, and his father, uncles and brothers have all worked at the most popular restaurants in Beijing.

Wang's father was a well-known chef at Zhimeizhai restaurant, which is famous for its pastries. Before each Mid-Autumn Festival, his father was so busy making Beijing-style mooncakes that Wang's brothers all went to the restaurant to help him.

According to Wang, there are two main types of Beijing mooncakes－zilaihong, brown skin, and zilaibai, white skin.

Made with sesame oil, brown-skin mooncakes have a hard crust made of rock sugar, walnut kernels, pumpkin seeds and candied tangerine peel slices. They are covered in syrup and baked to get a brown exterior.

They are used for worship and in religious ceremonies and can be given as gifts to friends and family, Wang said.

Zilaibai uses lard and white sugar in the dough which makes it soft and sweet and easy for young and old people to eat.

With its flaky exterior, and filled with pine nuts, chopped walnuts and pumpkin seeds, fanmao, or "furry", mooncake is another famous Beijing version of the treat. It was favored by the Empress Dowager Cixi (1835-1908) who gave it its name.

Wang said an authentic furry mooncake weighs 250 grams, and the crust should be so soft that it melts in the mouth without leaving any crumbs.

Mooncakes used in ceremonies and rituals were abundant on special occasions in the past.

"A rich family would have a pastry table piled almost to the ceiling with different kinds of desserts, including different varieties of mooncake," Wang said.

"On the second day of a ceremony, the remaining pastry would be distributed to the children. But you could't sneak up and grab a piece as they were packed so tightly the pile would collapse." 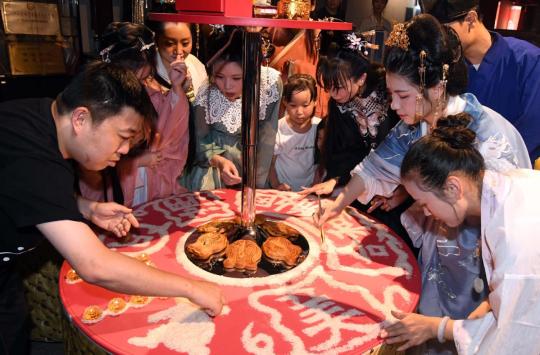 Over the years, mooncakes have gradually become a daily staple, Wang said, adding they have gone from a homemade specialty to being produced in factories and by professional chefs.

Modern twists are also being applied. From the patterns on the crust, to the fillings and packaging, every aspect of the mooncake has undergone a creative transformation.

Fast-food company KFC, in collaboration with the Palace Museum in Beijing, has launched a box of mooncakes celebrating paintings by Wang Ximeng from the Song Dynasty.

Belgian chocolate maker Godiva is combining Western and traditional flavors, producing a mooncake filled with osmanthus, red bean paste and milk chocolate and another with a green tea, kumquat and white chocolate filling.

Snack brand Wei Back has launched a 500-gram mooncake that has eight layers of fillings.

Crab meat, spicy beef, duck, crayfish and even black truffle are nontraditional fillings that have made their way into mooncakes.

Apart from mooncakes, there is a tradition of eating fresh seasonal fruit and vegetables during the festival. In Zhucheng, Shandong province, people eat taro, sweet potato, peanuts and carrot at the start of the holiday.

Xiao believes the festival needs to keep its traditions while coming up with new ideas to interest younger people and maintain its relevancy to contemporary society. "Mid-Autumn Festival can represent an ideal life for Chinese people," Xiao said.