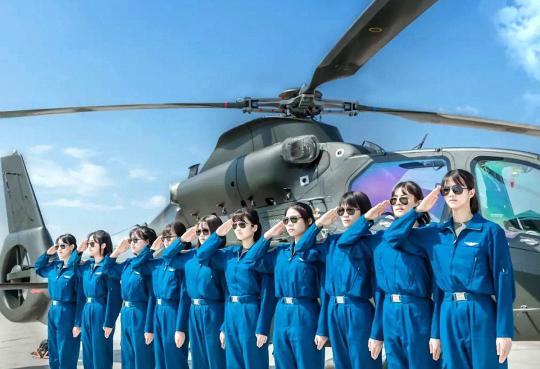 Female pilots salute during their first solo flight training at an airport in southern Shanxi province. The 10 students are the first batch of airwomen trained by the People's Liberation Army Ground Force. They will graduate next year. [Photo/Xinhua]

The first 10 female flight students trained by the People's Liberation Army Ground Force are expected to graduate and join operational units in 2021.

The students recently completed their first solo flights at a Ground Force airport in southern Shanxi province, operating the French Gazelle light-duty helicopter to carry out some simple maneuvers, a video clip published by the Ground Force showed.

They will continue taking flight training, and after their graduation in 2021, they will be assigned to Ground Force units across the nation.

Pictures released by the Ground Force showed the women in front of several WZ-19 combat helicopters, hinting that they may operate such helicopters in the future.

Compared with aviation units of the PLA Air Force and the PLA Navy that mainly deploy fixed-wing aircraft, the Ground Force's aviation wing uses helicopters that include combat, reconnaissance and transport models.

Developed by Aviation Industry Corp of China's Harbin Aircraft Industry Group, the WZ-19 is propelled by four blades driven by two turboshaft engines. It has a maximum cruise speed of 245 kilometers per hour, a maximum takeoff weight of 4.51 metric tons and an operational range of 700 kilometers, according to AVIC, which makes the aircraft.

The helicopter can carry eight missiles and two rocket launchers. To protect its pilots, it is equipped with armor plating and crash resistant seats.

The 10 women are the first to be trained by the Ground Force to become aviators. The service has had some female pilots in its aviation units, but they were former PLA Air Force pilots flying fixed-wing planes.

In the United States, women are a significant force in the military's helicopter fleet. In 2014, about 10 percent of US Army helicopter pilots were women, according to a report released by the US Army that year. There are many female aviators in the US Army who have operated the world's most powerful attack helicopter, Boeing's AH-64 Apache, US media has reported.

Retired Major General Liu Xiaolian, one of the third batch of the PLA's female pilots, said women are as good as men when it comes to operating a modern military aircraft because IQ and willpower, rather than physical strength, are more important in modern air combat.