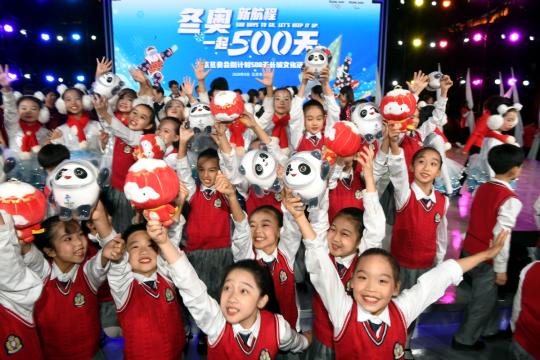 Children hold up mascots for the Beijing 2022 Winter Olympics and Winter Paralympics at an event on Sunday marking the 500-day countdown to the Beijing Games. (Photo/China Daily)

Even with tough challenges amid the COVID-19 pandemic, Beijing's preparations for the 2022 Winter Olympics show no sign of slowing as organizers celebrate the 500-day countdown to the winter sports gala.

Organizers are focusing on venue readiness, management for the Games and post-event operations. The Chinese capital, together with co-host Zhangjiakou, Hebei province, is making solid progress to honor its promise of hosting sustainable Games with a lasting legacy in 2022.

Progress continues even though the pandemic forced cancellation this year of some events that were to be held prior to the Games.

Preparation of all 13 competition venues, newly built or renovated, will be finished by the end of the year. Planning for post-Games venue operations, recruitment of volunteers and designs of medals and the Olympic torch are all underway and on schedule, Beijing organizers said on Monday, with 500 days to go before the Games' opening ceremony on Feb 4, 2022.

The 2022 Winter Olympics will take place across three venue clusters－downtown Beijing, the city's northwest Yanqing district and Zhangjiakou's Chongli district. The Chinese capital will be the world's first city to host both the Summer and Winter Olympics, after having staged the 2008 Games.

Normalcy is returning to Chinese society after the country has effectively contained outbreaks of the virus. Beijing is picking up its preparations despite the global sports shutdown caused by the virus, which resulted in the cancellation of an International Ski Federation Alpine Skiing World Cup meet in Yanqing, which was originally scheduled in February as the first official Beijing 2022 test event.

"Preparing for the Games is just like running a marathon. We are more than halfway through the race now but, with the pandemic still going on, we are facing an uphill battle," said Han Zirong, a vice-president and secretary-general of the Beijing 2022 organizing committee.

With the 2020-21 winter sports season approaching, Beijing 2022 organizers have been working closely with the International Olympic Committee, international winter sports federations and other stakeholders to deal with challenges, such as organization of pending pre-Games test events and inspection visits of international governing bodies.

"This is something very significant for the entire Olympic movement," Bach said of Beijing's progress at the 500-day mark during a China Central Television interview aired on Monday evening.

"Our Chinese partners in the organizing committee have met all the key milestones despite the crisis. So, the stage is set for successful Olympic Winter Games Beijing 2022 and for writing Olympic history," said the former German Olympic fencing champion.

With the infrastructure for the Games almost ready, the Beijing organizing committee now has to work out feasibility plans with winter sports international federations to run further test events safely.

An International Skating Union short-track speed skating race and the figure skating grand prix season finale, both originally scheduled in December in Beijing, are among test events to be discussed.

Along with its virus-control measures, Beijing's commitment to organizing the 2022 Winter Games with a green and sustainable approach has shed new light on the future of permanent Olympic projects.

As part of the plan, officials have taken advantage of the 2008 Games' legacy to repurpose five venues that were used for the Summer Olympics, such as the iconic National Aquatics Center and the Wukesong Arena, to host competitions and ceremonies in 2022.

The aquatics center, built for swimming in 2008 and known as the "Water Cube", has been transformed into an "Ice Cube" for curling after a renovation that involves filling the main pool with removable steel structures to make ice.

Some newly built Beijing 2022 venues, featuring new technologies and incorporating post-Games plans, such as the National Speed Skating Oval, are setting an example for eco-friendly operation.

The oval is the world's first of its scale to use carbon dioxide as a green refrigerant to make and maintain a 12,000-square-meter ice surface for speed skating, replacing the use of the environmentally harmful substance Freon.

To make full use of the venues, China is also implementing a national plan to involve 300 million people in winter sports activities beyond 2022. That will be facilitated by new infrastructure, such as a high-speed railway linking the three Games zones within a 50-minute train ride.

"The Beijing 2022 Winter Games can provide a historic opportunity to develop winter sports in the country," Sarah Lewis, secretary-general of the ski federation, said this month during her opening speech at the World Winter Sports Expo (Beijing) 2020.