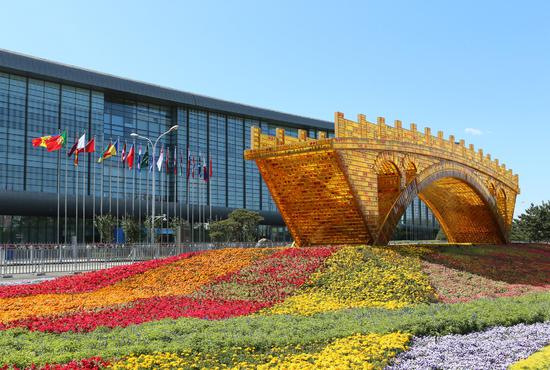 Photo taken on May 13, 2017 is the "Golden Bridge on Silk Road" structure in front of China National Convention Center in Beijing. [Photo/Xinhua]

The United Nations (UN) will open high-level meetings to commemorate its 75th anniversary on Monday, with world leaders gathering via videoconference to express support for collective efforts to tackle global challenges.

Chinese President Xi Jinping is expected to reaffirm China's commitments to supporting the work of the UN and improving global governance system, and elaborate on China's concepts for development, as he did five years ago, aiming to promote the building of a better future for the international community.

China will continue to participate in building world peace, contribute to global development and uphold the international order, said Xi at the 70th session of the UN General Assembly in 2015.

In the past five years, a host of important initiatives and measures in support of the work of the UN announced by the Chinese leader have all been delivered on the ground, demonstrating China's resolve to promote and uphold multilateralism.

As the novel coronavirus is ravaging across the world, China actively responded to the UN global humanitarian response plan against the pandemic, by twice donating funds to the World Health Organization (WHO) totaling 50 million U.S. dollars, provided material aids to over 150 countries and international organizations, and exported epidemic prevention supplies to more than 200 countries and regions.

China will continue to support the WHO in playing a leading role in the global fight against the COVID-19 pandemic, Xi said earlier this month at a meeting held in Beijing to commend role models in the country's anti-virus fight.

UN Secretary-General Antonio Guterres expressed appreciation for China's help in fighting COVID-19 in a phone conversation with Xi in March.

The UN appreciates China's sharing of experience in epidemic prevention and control with developing countries and provision of such valuable assistance as medical supplies, vaccines and medicines, he said.

In an interview with Xinhua on Friday, the UN chief said China is "a pillar of multilateralism."

China has been playing an increasingly bigger role in regional and world affairs, Guterres said, adding that "the United Nations and China enjoy a high level of cooperation ... I welcome China's comprehensive position on a wide number of topics of common interest, ranging from climate change to peacekeeping, and sustainable development."

Since the 2015 Leaders' Summit on UN Peacekeeping, China has registered an 8,000-strong standby force and a 300-member permanent police squad for UN peacekeeping missions, as the Chinese president pledged.

Six of its standby contingents have been elevated to Level Three in the UN Peacekeeping Capability Readiness System. As such, China now has the biggest standby force and most varieties of contingents among all UN member states.

The China-UN Peace and Development Fund has also provided a total of 67.7 million dollars for over 80 projects, supporting the UN's efforts in areas such as peacekeeping, counter-terrorism, energy, agriculture, infrastructure, health and education.

China has been playing an increasingly bigger role in regional and world affairs, Guterres said, adding that the UN's close cooperation with China also extends to peace and security issues around the globe, including in Asia, Africa, and the Middle East.

"The United Nations has supported and witnessed China's remarkable development achievements during this period and is committed to further strengthening our partnership in all pillars of the organization's work, including development, peace and security and human rights," he added.

Guterres said he trusts that China will continue playing an important role in supporting multilateral efforts in building more equal and inclusive societies that are more resilient toward unprecedented global challenges.

The South-South Cooperation Assistance Fund has supported over 80 projects in more than 30 developing countries, injecting impetus into global sustainable development.

China has also made important contribution to women's development in the world.

China has also been taking an active part in global ecological governance.

Its Juncao technology, which uses grass to grow mushrooms, has made its way into more than 100 countries, ranging from Laos to the Central African Republic. China's technology and knowledge in greening the desert have been shared with countries in Africa and Central Asia.

"We need a staunch multilateralism" to form an effective response to the environmental problems common to all humanity, Andersen said. "I am pleased to see China taking an active role in promoting this approach."