US blasted for report on Chinese military 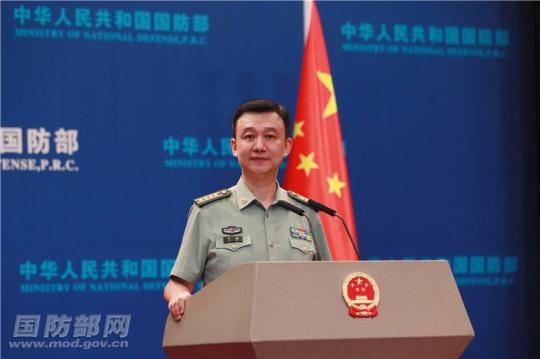 Spokesman calls for an end to incorrect statements, with steps to maintain ties

The United States, rather than China, should be blamed for igniting unrest and breaking order and peace around the world, a Chinese spokesman said on Sunday, urging the U.S. to stop vilifying China's defense policy and its military.

"Over the past 20 years, the U.S. launched illegal wars or military operations against Iraq, Syria, Libya and other countries, causing more than 800,000 deaths and tens of millions of innocent civilians to lose their homes," Senior Colonel Wu Qian, a spokesman for the Ministry of National Defense, said in a statement published on the ministry's website. "Many years of evidence shows that it is the U.S. that is the fomenter of regional unrest, the violator of the international order and the destroyer of world peace. This fact has been universally recognized by members of the international community."

Instead of reflecting on its own misdeeds, the U.S. keeps making false statements about China's righteous defense building and reasonable moves aimed at protecting China's sovereignty and security interests, he said.

"We urge the U.S. to regard China's defense and military building with objectivity and reason, stop making incorrect statements and reports and take concrete measures to maintain positive development in the relations between the two nations and militaries," Wu said.

The spokesman's remarks came in response to the U.S.' latest report on China's military and national defense－the Military and Security Developments Involving the People's Republic of China 2020－released by the U.S. Department of Defense this month.

Wu said the report intentionally distorts the relationship between the Communist Party of China and the Chinese military, misrepresents China's defense policies and military strategies, agitates tension over so-called military threat of China, gives false information about China's defense and military modernization and makes groundless accusations against China for its defense expenditure, nuclear policies and the Taiwan question.

"This has become new evidence of the U.S.' defamation of China and the Chinese armed forces," Wu said. "The publications of such reports over the past 20 consecutive years are nothing but plain hegemonic and provocative acts and have extensively damaged relations between the two nations and militaries."

China expresses strong indignation and firm opposition to such acts, and it has made solemn representations to the U.S., he said.

The spokesman said that the People's Liberation Army is a military force under the CPC's leadership and serves the Chinese people. The Party founded and has always guided the PLA. The PLA has made tremendous sacrifices and contributions to national independence and liberation as well as the nation's socioeconomic development.

He stressed that China adheres to a peaceful development path, upholding defense and military strategies that are defensive in their nature. The country develops its armed forces only to safeguard its sovereignty, security and development interests, posing no threat to any other nation.

The Chinese military's overseas operations help provide safety and opportunity to nations rather than threats and challenges. It has always been a force devoted to maintaining world peace as well as an active contributor to peacekeeping, maritime escorts and disaster relief missions around the world, Wu said.

Since the outbreak of the COVID-19 pandemic, the Chinese military has shared its anti-virus experience with many countries and has donated a lot of medical equipment to help with the global battle against the contagion, he added.

Regarding Taiwan, Wu said it is the island's ruling Democratic Progressive Party and foreign anti-China forces that continue to fuel tensions across the Taiwan Straits. He said the PLA is determined to use any necessary measures to thwart actions that interfere with China's internal affairs or compromise peace and stability across the straits.