HK opposition under fire over protests 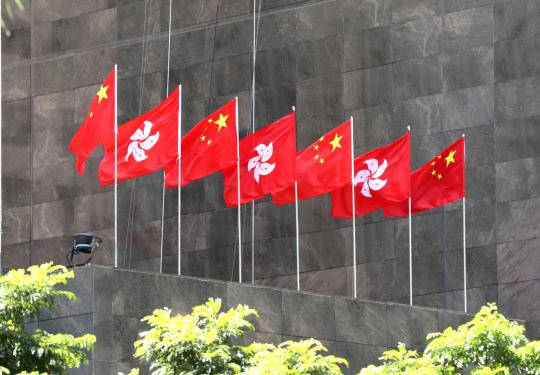 The Chinese national flags and flags of the Hong Kong SAR flutter in Hong Kong. (Photo/Xinhua)

Hong Kong education experts expressed concern on Monday that the city's young people were being used as political pawns by the opposition after the reappearance of unlawful assemblies and violence on the streets on Sunday.

In addition, they noted the resurgence of illegal protests will not only undermine educators' efforts to enhance students' awareness of the law but could also affect local schools' plans for the resumption of classes later this month.

Their comments followed the arrest of at least 289 people, the youngest of whom was 13, for their role in Sunday's unauthorized rally in Kowloon.

Students' participation in illegal and violent protests is a common phenomenon, said Wong Kwanyu, president of the Hong Kong Federation of Education Workers. Data provided by the Hong Kong police showed that nearly 40 percent of the 9,000-plus arrested during the protests since last June over the now-withdrawn extradition bill were students.

Wong said that this is the result of the opposition's long-standing advocacy of "civil disobedience" and "achieving justice by violating the law" among young people. These people had distorted citizenship, the core of which is to serve the public interest and be law-abiding, he added.

Wong suggested that, as primary and secondary schools in Hong Kong would resume face-to-face classes at the end of September, the police should inform schools of the presence of minors at demonstrations, so that schools could assess the risk of infection and decide whether these students should be allowed to go to campus.

With these teenagers joining their demonstrations, the opposition managed to mislead the public into believing that its cause was supported by all generations, said Cheung.

The illegal gatherings on Sunday were held after some people heeded online calls to take to the streets and protest against the government's decision to postpone the Legislative Council election for one year, as well as the enactment of the National Security Law for Hong Kong.

Radical protesters violated the current social distancing measures by gathering in some of Hong Kong's busiest streets. They blocked roads and hurled water bottles and debris at police officers.

Hours after the protest, the Hong Kong government issued a statement condemning the illegal acts as "selfish".

"The unlawful assembly not only violated the social distancing restrictions but increased the risk of virus transmission and threatened public health," the statement said.

On Sunday, the Liaison Office of the Central People's Government in the Hong Kong Special Administrative Region strongly condemned the street confrontations, which it said showed "a coldblooded disregard for the lives, health and safety of the general public".