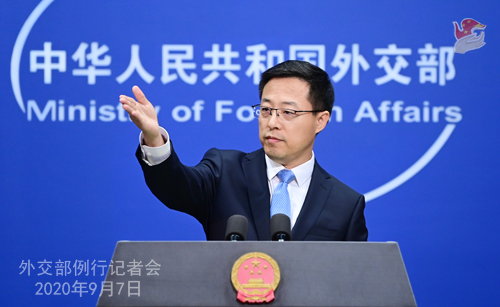 "If the United States is bent on going down the wrong path and doubles down on its mistakes, China will be compelled to take necessary and justified responses to firmly safeguard its legitimate interests," foreign ministry spokesperson Zhao Lijian said at a daily press briefing.

Zhao made the remarks in response to press queries about whether tensions could escalate as some media reported that China has refrained from renewing the expiring press credentials for journalists from U.S. media outlets.

Denying the reports as untrue and blame-shifting, Zhao said extensions of press credentials for U.S. journalists are being processed, during which time their work and life in China will not be affected.

"For some time, the United States has been escalating political suppression of Chinese media, which has now reached a hysteria extent," he said.

Since 2018, around 30 Chinese journalists have had their visa application indefinitely delayed or denied.

In February 2020, the U.S. designated five Chinese media organizations in the United States as "foreign missions" and then placed a cap on the number of their staff, in effect expelling 60 Chinese journalists.

In May 2020, the United States limited visas for Chinese journalists to 90 days, requiring them to apply for a visa renewal every 90 days.

"Such moves have severely disrupted the normal work of Chinese media in the United States, seriously harmed the reputation of Chinese media, and hindered the people-to-people and cultural exchanges between the two sides," he said.

The United States, while branding its press freedom, discriminates against Chinese media and even uses Chinese journalists as hostages to put pressure on China, Zhao said, adding that this reveals its hypocrisy regarding so-called press freedom. "It is bare-faced double-standards and hegemonic bullying."

The spokesperson said that China has always been willing to maintain communication and consultation with the United States on resolving the issue concerning the two countries' media and journalists, based on equality and mutual respect.

The United States, however, has been rude and arrogant during the consultations, ignoring China's legitimate concerns and requests and exerting maximum pressure on China using Chinese media and journalists as hostages, according to Zhao.

"If the United States cares about their journalists in China, they should extend visas for all Chinese journalists as soon as possible, rather than using journalists of the two countries as hostages for the selfish political interests of a few politicians," he said.