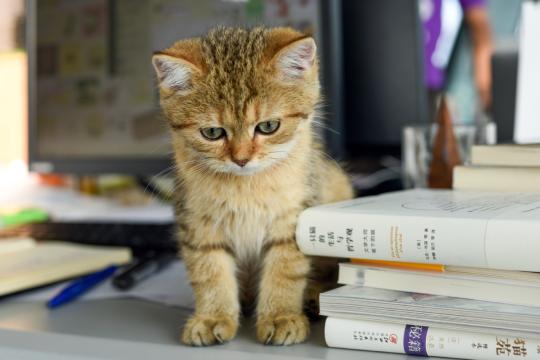 Zhao Yang, a visitor from Beijing to the most elevated library in Tianjin－located inside Tianjin Tower, which rises to 415.2 meters－was surprised to see seven cats prowling among the bookshelves.

"They are very heart-healing," Zhao said.

It was the first time Zhao had left Beijing to relieve anxiety during the COVID-19 pandemic.

"Previously I had a conventional idea that a cat-themed cafe or library must be run by private owners who charge for tickets," Zhao said. "But here they are in a public library."

Recently, seven cats began their duties as "intern curators" at the tower library, Western Shore Book House, which is owned by the city of Tianjin. They'll provide comfort to patrons who have been closed in at home because of the coronavirus.

The cats represent a variety of breeds－ragdoll, exotic shorthair and chinchilla, to name a few. They are only a year old on average.

The library has drawn attention as the highest in Tianjin－257 meters above the ground, around the middle of Tianjin Tower, which is a landmark in the city that provides panoramic views from its top and remains one of the world's few towers built over a lake.

It first opened on Jan 18 but was quickly closed because of the coronavirus outbreak.

"The reopening of the library－augmented by the slinky felines－will make it a place where lonely people can find solace during the pandemic," Wang said.

Now it's reopening in conjunction with Tianjin's Fragrance of Books project, launched by the city's publicity department to encourage people to read more.

The project is popular with residents, who can borrow books at no cost.

Local residents' passion for reading was shown by a recent survey by Tianjin Publishing and Media Group and Dangdang.com, a domestic online book retailer.

The survey indicated that during the pandemic, Tianjin residents have spent more on buying printed books than in previous years, and their average spending on printed publications has risen to No 7 in the country from No 11 last year.

The survey concluded that the city is regaining its previous vigor in business and production while residents' thirst for more spiritual relief has risen with the pandemic.

Tianjin has set up 3,532 reading rooms in suburban areas, 2,000 rooms at local factories and companies, 200 city reading bars, 100 public libraries and six subway trains with books on their seats. All provide free services, with the majority having reopened since June.

The tower library will soon launch a series of activities, including groups for the cats' fans. Group members will be given priority in close interactions with the cats, such as taking snapshots with them.

The cats will also move to special quarters, which are being renovated.

The reader-friendly events with the cats will include a love show event on Double Seven Day, often called Chinese Valentine's Day, which is on Tuesday.

Early this month, the city's secondhand book market in the Gulou area, where the Drum Tower is located, announced that it would resume business. It was previously located on Ancient Cultural Street but was closed during the pandemic.

The closure of the book market triggered controversy, and many bookworms expressed their hope that it would reopen soon.

According to Xu Fengwen, a scholar of local history, "The reopening of the old and secondhand book market, which I have been wandering for more than 60 years, since my youth, is infused with book lovers' nostalgia."

Xi Ke, general manager of Sisyphe bookstore at The Mixc shopping mall, said, "The pandemic didn't hamper our steps in opening more bookstores in Tianjin." A new one, measuring 517 square meters, will open this month at Aeon Mall in Tianjin's Jinnan district.