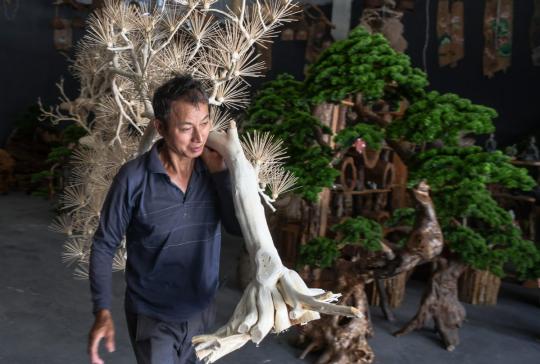 A worker carries a wood sculpture at a factory in Yongfu, Guangxi Zhuang autonomous region, on Aug 7, 2020. The county helped returning migrant workers learn the skill of wood carving to lift them from poverty. [Photo/Xinhua]

When Wang Xiaohui left the military and returned to his hometown in Dangshan county, Anhui province, in 2017 to start his own business, he said he had no experience, credentials or money.

"As an entrepreneur, I was armed with nothing but a deep connection with my home village and the local specialty Dangshan pears that I grew up eating," he said.

Now, as co-founder of a pear planting and logistics company that hires over 100 local workers, Wang said like-minded returnees from cities or other backgrounds are much more fortunate as a series of supportive policies ranging from cash rewards to training sessions have been offered as stimulus in past years.

The environment for rural innovation and entrepreneurship will be improved by means of a plan released by the Ministry of Agriculture and Rural Affairs on July 17 that outlined a comprehensive set of goals regarding the development of rural industries.

Those goals include raising to 15 million the number of people returning to rural areas by 2025 to build startups. In recent years, that number has been increasing by 1 million each year and reached 8.5 million nationwide by the end of 2019, according to the ministry.

Zeng Yande, chief of the ministry's rural industry development department, said analysis shows that these targets are within reach.

"Migrant workers going back to the countryside for job opportunities has become a new trend," he said. "Equipped with an understanding of both urban and rural areas, exposure to industrialization as well as internet skills, they will play a strong role in advancing rural industries."

Potentially deepening the trend is the tough job market induced by the COVID-19 epidemic. Data released by the ministry in mid-June shows that 23 million migrant workers were temporarily stuck in the countryside amid the outbreak, and 600,000 of them had expressed their intent to stay home longer to establish their own businesses.

Wu Zhenjun, a researcher at the Development Research Center of the State Council's rural economic research office, said during an interview with China Economic Times that with the implementation of China's rural revitalization strategy that has already been drawing people to their rural hometowns, damper job prospects will lead to a further increase in returning migrant workers, including those stranded in home villages and those forced to return after failing to land stable jobs elsewhere.

"These workers have accumulated a certain amount of both human and social capital and are bound to become a significant force in rejuvenating the countryside," he said.

At Wang's company, about half of the 50 new employees this year are likely to be migrant workers returning from the village.

"A rising number of my fellow villagers have decided to work closer to home due to shuttered factories in cities or interrupted transportation," he said.

Xu Jisheng, head of the commerce bureau in Dangshan county, added that this year, the majority of the newly unemployed have opted for service sector jobs closer to home or have dived into rural e-commerce businesses.

"For those who set their sights on forming new enterprises, they need infrastructure, such as innovation parks, as well as resources including suitable financial products and experienced tutors who can offer targeted guidance," he said.

According to the recent development plan, the ministry has called for cultivating industry pioneers who can mobilize and guide prospective entrepreneurs and build platforms, such as innovation parks and incubators, as well as invite experts and well-established entrepreneurs to provide training and share experiences.

"One lesson we have learned from the COVID-19 outbreak is that we should have an emergency plan or mechanism in place to offer advice during difficult times," she said. "For instance, since the disease outbreak has sapped demand, we have encouraged local villagers to use idle time to learn more about social media promotion and have invited experts to give crash courses on that."

"The association is the place to go when local entrepreneurs or workers encounter problems and where wisdom can be pooled to solve issues," she said.

With the growing enthusiasm for rural entrepreneurship, He Xuefeng, dean of Wuhan University's School of Sociology, also cautioned that migrant workers should be educated on the risks inherent in the industry.

"Data show that about 80 to 90 percent of rural startups may be on the verge of failure at one time or another. With the contraction of the market, an overflow of returnees from urban areas may crowd the arena," he said during an interview with Time Finance, an online financial news portal.

He suggested more efforts be devoted to developing emerging technologies or products to create new jobs.