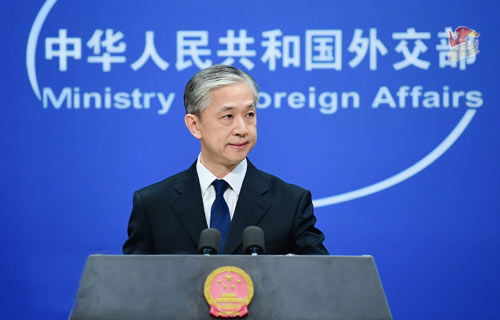 "China will be compelled to make necessary and legitimate reactions if the U.S. is bent on going down the wrong path and doubles down on its mistakes," Wang told reporters at a news briefing in Beijing on Thursday.

The U.S. has taken several rounds of action against Chinese media since 2018. On May 8, the U.S. limited visas for Chinese journalists to 90 days, requiring them to apply for visa renewal every three months.

Under the current regulations, if the journalists have not yet received an answer, their visa applications would be considered to be in process and they could remain for another 90 days, until Nov 4.

Wang said that the actions of the U.S. have severely disrupted Chinese journalists' normal reporting activities, gravely damaged the reputation of the Chinese media and affected normal people-to-people exchanges between the two countries.

"It is the U.S. side that caused the current situation and is responsible for it," he said, urging Washington to immediately correct its mistakes and stop its political oppression of Chinese media and journalists.

The spokesman also said on Thursday that China has noticed that Australia welcomes China's development, but hoped that the country will turn its statements into concrete actions and do more things conducive to the China-Australia comprehensive strategic partnership as well as regional peace and stability.

Speaking at the Aspen Security Forum held virtually on Wednesday, Australian Prime Minister Scott Morrison said that his country has found no evidence showing it should restrict the popular short-video app TikTok.

Morrison also said that building an Indo-Pacific alliance with like-minded nations will be a "critical priority" for his government, and China's rise as a major economic partner has been good for the global economy, the Indo-Pacific region and Australia.

Wang said, "China is always committed to peaceful development and will never seek hegemony or confrontation." He added that regional cooperation architecture should follow the trend of times and people's aspirations, which are peace, cooperation, development and win-win results. "Otherwise, it will not get support from regional countries," he said.