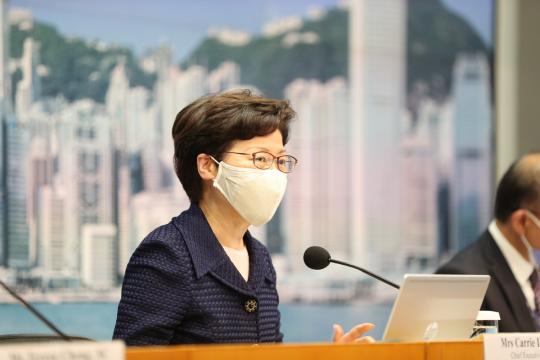 There is no other choice but to put off the election due to the high risk of infection amid the grave epidemic situation, Lam said when meeting with Fan Hsu Lai-tai, former president of the LegCo, at the Government House.

She cited risks listed in a letter from the chairman of the Electoral Affairs Commission, including involvement of millions of voters, social distancing hard to implement, and infection risks to voters and election staff.

If the election is held as scheduled, it will be unfair to hundreds of thousands of voters who cannot exercise their right for being stranded outside of Hong Kong due to the epidemic, Lam said.

There are more countries that have postponed their elections than those have decided to stick to the schedule in the world, Fan said, adding that no one is deprived of the voting right because of the postponement.

The Hong Kong and Macao Affairs Office of the State Council said earlier that the Standing Committee of the National People's Congress (NPC), China's top legislature, will at the earliest possible date decide on how to deal with the vacancy of the LegCo incurred due to the postponement.

Fan believes that the NPC Standing Committee will deal with the issue properly and let more Hong Kong residents understand.