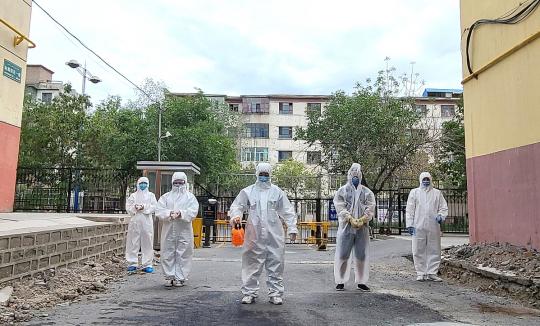 Workers disinfect a community in Urumqi, Xinjiang Uygur autonomous region, on Sunday, after a recent COVID-19 outbreak in the city. CHINA DAILY

Urumqi, capital of Xinjiang Uygur autonomous region, will continue to conduct daily disinfections of roads and communities through Saturday amid intensified control and prevention measures after a recent rebound in COVID-19 cases.

Such measures will include conducting thorough testing for residents in the city.

There were eight new locally-transmitted cases in China reported on Monday, and all were in Xinjiang, including one in the Xinjiang Production and Construction Corps. The report raised the regional total to 55 since the first case was reported on July 16, and another 3,119 people are under medical observation, Rui Baoling, director of the regional disease control and prevention center, said on Tuesday at a news conference.

To curb the spread of infection, the city has launched a free nucleic acid test campaign for people in the city. With over 6,600 medical staff members involved and with help from the National Health Commission, the testing capacity has been significantly increased, and around 800,000 samples can now be collected each day, said Chang Jianmei, deputy director of the city's health commission.

Moreover, the city has conducted extra disinfections covering the downtown area, including residential communities, from midnight to 8 am every day since Sunday.

As of Tuesday, around 37 metric tons of disinfectant have been used to sterilize 1,455 roads, 3,872 residential communities and 2,389 courtyards, data from the city government showed.

"The cleaners on our team sterilize bus stations, underground passages and shops in the daytime, and main roads and dumping grounds along the street at night," said Luo Jianjiang, head of a cleaning squad of Shaybak district in Urumqi, according to a report by Tianshannet, a local news portal, on Tuesday.

Amid the intensified measures to curb the disease, those who have spread rumors to exaggerate the outbreak have been punished.

For example, a female resident said the outbreak in Urumqi was caused by a woman who came from Kazakhstan without taking a nucleic acid test or being quarantined, which turned out to be just a rumor.

The resident was fined 500 yuan and placed under administrative detention, according to the local public security authority.