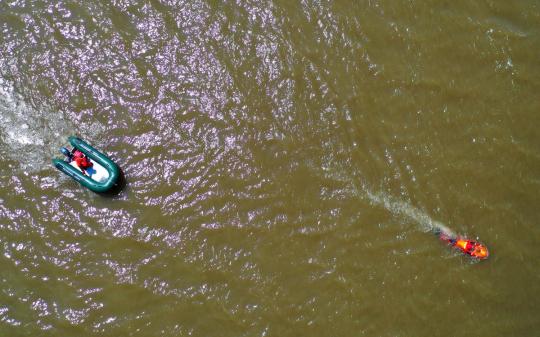 An emergency rescue volunteer has a drill with a rescue robot in a reservoir in Nuocheng, Jimo district, Qingdao, East China's Shandong province, June 21, 2020. [Photo by Liang Xiaopeng/People's Daily Online]

Cutting-edge technologies, such as big data and AI, are making China's flood prevention smarter, as they are applied to weather forecast, flood monitoring and warning.

Regions along the Yellow River, which officially entered flood season on July 1, are beneficiaries of these technologies.

The regime of the river is now being monitored and tracked by satellite remote sensing, and unmanned aerial vehicles are also employed to transmit real-time videos of the variation in the river's discharge volumes.

So far, 346 large and medium-sized reservoirs in the Yellow River basin have been covered by real-time monitoring with over 1,000 video signals.

South China and the regions south of the Yangtze River were hit by the first round of heavy rains in June since they entered the rainy season, and these regions had been paid special attention to by the National Meteorological Center of China Meteorological Administration (NMCCMA) a week before the rains. While closely following the development of the weather, the NMCCMA also reminded relevant regions to prepare for possible floods.

The accuracy of rainstorm warning rose to 88 percent in 2019, and severe convections can be forecasted 38 minutes in advance. The country also led the world in typhoon track prediction.

The rainfall areas in East China has begun moving northward since July. Normally it is hard to forecast flood in North and Northeast China, because precipitation gathers quickly in small and medium-sized rivers in mountainous areas there, which may give rise to floods within a short period of time. Since these areas are more prone to risks of sudden torrential rains and floods, scientific supports are especially important.

"Thanks to these new technical methods, it only takes 10 to 15 minutes for the Ministry of Water Resources to collect the rainfall information from 120,000 flood-warning stations across the country. And it only takes dozens of minutes to forecast a flood," said Liu Zhiyu, deputy director of Hydrological Forecast Center of the Ministry of Water Resources.

A drone rescues a man in the South Lake of Huaibei, Anhui province in East China, July 4, 2019. [Photo by Yue Jianwen/People's Daily Online]

The efficient application of big data and AI in flood warning for small and medium-sized rivers has greatly improved China's ability to forecast floods, Liu added.

These technologies have played a major part in this year's flood prevention and control in China.

For instance, the technologies of 5G and VR have been introduced in the real-time water-level monitoring in Anqing, East China's Anhui province. The water condition filmed by panorama cameras can be transmitted to monitoring personnel through low-latency 5G signal. In addition, water levels can be observed by workers with VR glasses so that they can fully grasp the conditions of the river and the progress of disaster relief. As a result, the work efficiency has been significantly improved.

Thanks to the Internet of Things, urban drainage systems now have a "brain" to prevent waterlogging. In Fuzhou, East China's Fujian province and Guiyang, Southwest China's Guizhou province, areas that are more likely to have waterlog are marked on an electrical map shown on a big screen, so that in times of a heavy rain, relevant staff members can have a clear picture easily.

Apart from the state-of-the-art equipment, drones and AI robots are also must-have items in flood prevention and control.

Drones enjoy a natural advantage in disaster prevention and relief, as they are agile and free from the topographic condition, and have quick response and a wide scope of monitoring.

They can transmit high resolution pictures and videos of disaster sites to command centers. Armed with other equipment, drones can also search, locate and rescue those trapped. If armed with a night vision system, they can work all day round, and even dispatch relief supplies to those trapped.

Recently, robots for water rescues have been put into use in many places in China. The robot resembles a light boat, and can be controlled by a tablet computer or a controller. It can save three to four people every time.

If someone is trapped in a position with a fast-moving current and far away from the shore, the robots are able to move toward the position in full speed under the command of the control personnel so the drowning can hold onto it.