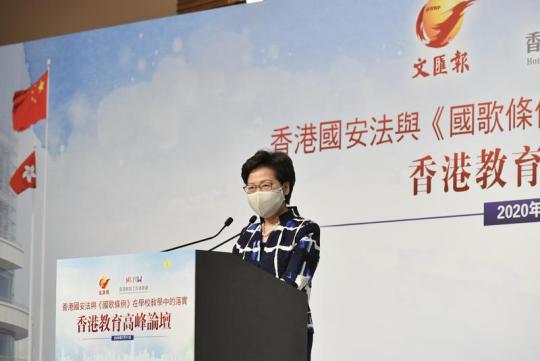 Chief Executive Carrie Lam Cheng Yuet-ngor said on Saturday that she hoped the passing of the National Security Law will bring about a turnaround in schools and allow students to focus on their studies again.

The recent politicization of school campuses have caused problems for students, Lam said in an address to a forum co-organized by the Hong Kong Federation of Education Workers and the city's Chinese language newspaper Wen Wei Po.

Lam pointed to a series of educational controversies since 2012 that saw campuses filled with anti-China and anti-government propaganda. This included negative media reports on the nation, as well as textbooks, lectures and other curriculum at schools that deliberately smeared the government and the police force.

Students accounted for over 40 percent of the 8,981 people arrested for illegal activities by the end of May, according to the city's police force.

In her opinion, the problem of politicized education resulted from the fact that the "one country, two systems" principle has not been fully understood and implemented. People also do not completely understand the principle of Hong Kong people governing Hong Kong with a high degree of autonomy to ensure the long-term stability and prosperity of the city.

These political issues must be resolved to improve the current situation, Lam said, adding that the problem won't be solved by investing money and resources in education alone.

She pledged that the Hong Kong government will cooperate with the educational sector to cultivate a sense of national identity in students and the younger generation, as well as an international perspective and a love of Hong Kong.

Tan Tieniu, deputy director of the Liaison Office of the Central People's Government in the HKSAR, agreed with Lam that the National Security Law for Hong Kong and the National Anthem Ordinance are "important" and "timely" for the city's education.

At the forum, Tan suggested adopting multiple ways to strengthen online and offline, in-campus and off-campus education opportunities on the National Security Law, calling on society to firmly fend off the politicization of the city's school system.

These civic education opportunities are important, Tan said, so that students learn the city's fate is intertwined with the nation and understand the legal basis of the law. He added that students can then ward off biased lectures and illegal acts.

Education chief Yeung, speaking at the forum, pledged to prioritize education relating to the National Security Law and the National Anthem Ordinance.

Safeguarding the "one country, two systems" policy falls under the interests of all residents, especially the young generation, as the principle is the cornerstone of Hong Kong's stability and prosperity, Yeung said.

Yeung said he hopes schools will join hands with other educational stakeholders, such as teachers, social workers and parents, to enhance relevant education. This will give students better knowledge about the nation's development and Chinese culture, and understand the importance of national security and respect the national anthem.

He also appealed to the education sector to continue cooperation with the government to help students know how "one country, two systems" operates and what benefits it can bring to Hong Kong.