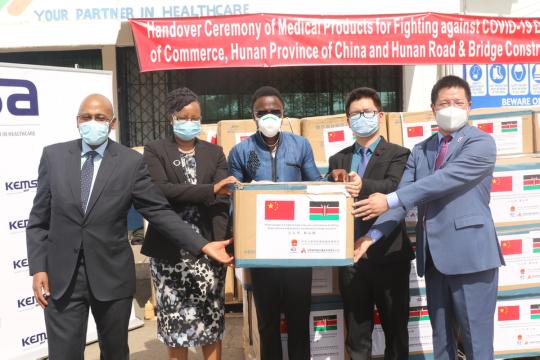 Peng Liyuan, wife of President Xi Jinping, has highlighted the importance of countries standing together and cooperating with each other in fighting the COVID-19 pandemic with solidarity.

In a letter of reply to Antoinette Sassou Nguesso, president of the Organization of African First Ladies for Development, and other African first ladies, Peng spoke of the valuable support provided by African countries to the Chinese people when they encountered difficult times in the early stages of the outbreak.

Peng also extended her regards to the African people for their efforts in combating the novel coronavirus, according to a news release published on Tuesday.

She pledged in the letter that the Chinese government would donate anti-epidemic materials to 53 African nations through the organization to help women, children and teenagers. The move is a way to express the Chinese people's friendly affection toward the African people, she said.

Sassou Nguesso, wife of the Republic of the Congo President Denis Sassou Nguesso, had recently written a letter to Peng in which she spoke highly of the role China has played in the fight against the COVID-19 pandemic.

On behalf of the organization's first ladies, she said she also hoped China would pay attention to African women, children and teenagers and provide medical assistance to them.

Recent donations of anti-epidemic supplies from the Chinese government have been sent to African countries. The Republic of the Congo's first lady attended the handover ceremony for the supplies in Congo.

African countries that received donations thanked China's care and support, saying that the timely help reflected that Africa and China are friends sharing weal and woe.

They also expressed their willingness to strengthen anti-epidemic cooperation with China and to deepen the traditional friendship between the peoples.

In addition to sending a large amount of anti-epidemic supplies to Africa, China had sent medical teams to 11 African countries by June 2 to support their efforts against COVID-19.

As of Tuesday, the novel coronavirus had caused 491,750 infections in Africa with 11,622 deaths, according to the Africa Centres for Disease Control and Prevention.