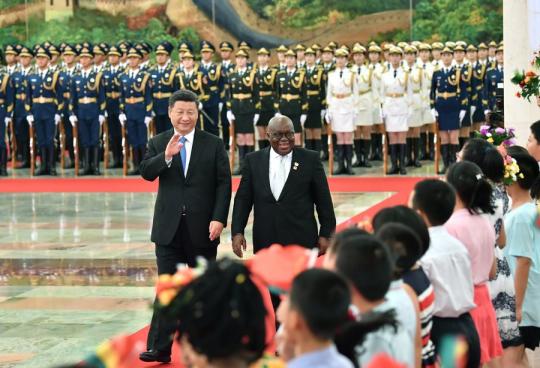 File photo shows Chinese President Xi Jinping holding a welcome ceremony for Ghana's President Nana Akufo-Addo before their talks at the Great Hall of the People in Beijing, capital of China, Sept 1, 2018. (Photo/Xinhua)

China will deepen cooperation with Ghana in various fields under the joint construction of the Belt and Road and within the framework of the Forum on China-Africa Cooperation.

President Xi Jinping made the remark in an exchange of congratulatory messages on Sunday with his Ghanaian counterpart, Nana Addo Dankwa Akufo-Addo, on the 60th anniversary of the establishment of China-Ghana diplomatic relations.

In his message, Xi said he highly values developing bilateral ties and is willing to work with Akufo-Addo to take the 60th anniversary as an opportunity to carry forward traditional friendship in order to benefit the two countries and their peoples and contribute to the building of a closer China-Africa community with a shared future.

Over the past six decades, the traditional friendship between China and Ghana has grown stronger with practical cooperation yielding fruitful results, Xi said.

Bilateral relations have shown a good momentum for all-round development in recent years, bringing tangible benefits to both peoples, he added.

The president noted that China and African countries, including Ghana, have stood by each other in the joint fight against the COVID-19 pandemic since its outbreak, which has demonstrated their brotherly friendship.

As of Sunday, the pandemic had caused more than 11,800 deaths in Africa with over 463,300 people being infected, according to the Africa Centres for Disease Control and Prevention.

In his message, Akufo-Addo said that Xi has shown extraordinary leadership in response to the COVID-19 pandemic, and China has won worldwide acclaim for its anti-epidemic assistance and support to countries around the world, including Ghana.

Xi, who is also general secretary of the Communist Party of China Central Committee, has also exchanged messages with Ukhnaa Khurelsukh, chairman of the ruling Mongolian People's Party and prime minister of Mongolia, according to a news release published on Saturday.

In the message, Xi said that the CPC is willing to strengthen exchanges and cooperation with the MPP to lead the China-Mongolia comprehensive strategic partnership to greater development and contribute to regional peace and prosperity.

Recalling that Khurelsukh sent a message to him recently on the occasion of the 99th founding anniversary of the CPC, Xi said it fully demonstrated the great importance Khurelsukh and the MPP attach to relations between the two parties and countries.

China is ready to strengthen anti-epidemic exchanges and cooperation with Mongolia and other countries, and jointly build a community of health for all, he said.

In a previous letter to Xi, Khurelsukh said that China's fight against COVID-19 has not only safeguarded the health of the Chinese people, but also made great contributions to protecting the health of people around the world, which he deeply admires.