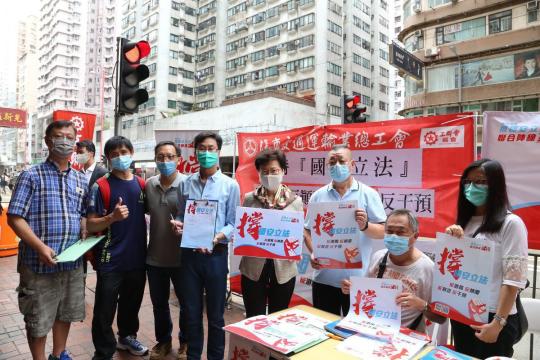 Nearly 3 million residents in Hong Kong have signed up to express their support for a national security legislation for their home city. (Photo provided to chinadaily.com.cn)

The national security draft law for the Hong Kong Special Administrative Region is based on the Constitution and the region's Basic Law and is fully in line with the "one country, two systems" principle, experts say.

The Standing Committee of the 13th National People's Congress, China's top legislature, started reviewing the draft at its 19th session from June 18 to 20.

The draft was formulated after the NPC adopted a decision during its annual session in May to improve the legal system and enforcement mechanisms for the HKSAR. The decision authorized the NPC Standing Committee to draft the law.

Tian Feilong, an associate professor of law at Beihang University in Beijing, said the draft has three legal bases: the Constitution, the Basic Law－Hong Kong's miniconstitution－and the NPC's decision.

Articles 31 and 62 of the Constitution give the NPC legislative power over the special administrative region.

"The NPC, as the highest State power, has the right to continuously carry out legislation. It is not so that with the Basic Law in place the NPC has no authority or need to continue to perfect the system of special administrative regions," Tian said.

The second legal basis is the Basic Law of Hong Kong, whose Article 23 stipulates that Hong Kong will make laws on its own to prohibit any act of treason, secession, sedition, subversion against the central government, theft of State secrets, and collusion with foreign political bodies.

Zou Pingxue, director of the Center for Basic Laws of Hong Kong and Macao Special Administrative Regions at Shenzhen University, said the second paragraph of the Preamble to the Basic Law clearly states that its purpose is to uphold national unity and territorial integrity and maintain the prosperity and stability of Hong Kong. Thus, improving national security legislation is in line with the purpose of the Basic Law.

Zou said that to ensure the "one country, two systems" principle and the high degree of autonomy for the HKSAR, national laws concerning the protection of State interests have not been put forward in the HKSAR to supplement the Basic Law. Instead, the HKSAR was given full trust to legislate on its own.

"But the national security bill was long shelved, and the probability of advancing it is very low. In which case, only the central government can remedy this gap," Zou said.

He said the new national security law will target the four "most urgent and harmful" criminal behaviors: secession, subversion of State power, terrorist activities and collusion with foreign or external forces to endanger national security.

These crimes partly overlap with those listed in Article 23. "It is compatible with and complementary to the Basic Law, rather than replacing it," Zou added.

Tian said the specific legislation is also made legal by the NPC's decision, which itself serves as the highest legal document to take effect since being adopted in May and already stipulates the basic legal framework and core points of the law.

The decision says the national security law will be listed in Annex III of the Basic Law for the HKSAR to promulgate and implement.

"It means the national security law will become part of the Basic Law and will have the same effect," Tian said.

Wang Chen, vice-chairman of the NPC Standing Committee, said on May 22, while explaining the necessity of the decision, that it was prompted by the increasing national security risks in the HKSAR becoming a prominent problem, threatening the core of the "one country, two systems" principle, the rule of law, and national sovereignty and development interests.

"The legislation is obviously trying to fix the serious lapses in the legal system and enforcement mechanism of Hong Kong in undertaking national security responsibilities," Zou said.

According to Zou, this problem had long lingered, leading to an increasingly grim security situation in the HKSAR until it was exposed in the unrest last year following the protests against the now-withdrawn extradition bill.

"A large number of thugs damaged social order, infringed on residents' freedom of life and property safety, attacked local and central governmental agencies, paralyzed traffic and airports, smashed and burned shops and ragingly boasted of Hong Kong independence with foreign forces," he said. "Some of these violent incidents showed almost no difference from terrorist acts.

"The legislation has been drafted to solve that problem in order to ensure the stability and integrity of the 'one country, two systems' principle," he said.

Zhang said it considers the difference between the two legal systems and stipulates that the HKSAR exercises the overall jurisdiction over national security cases. The draft also requires the HKSAR to establish a national security commission and set up a special department at the Police Force and Department of Justice to specifically conduct law enforcement and prosecution.

"From command to law enforcement, prosecution, judicial trial, the entire chain structure is authorized to be executed by Hong Kong itself. That means the draft fully respects the differences between the two systems and trusts the HKSAR," he said.