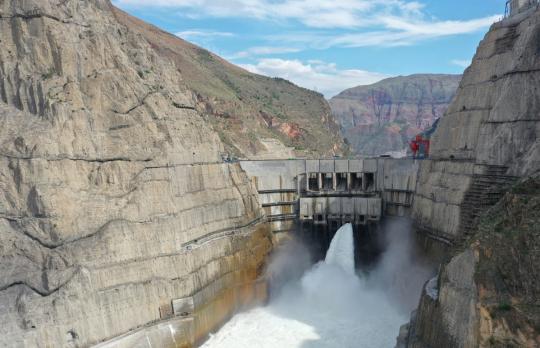 An aerial photo of the Wudongde Hydropower Station on the border of Sichuan and Yunnan provinces in Southwest China, on June 29, 2020. (Photo/Xinhua)

President Xi Jinping underlined on Monday the importance of giving priority to environmental protection and green development in exploring the hydropower potential of the Jinsha River in a coordinated and scientific manner.

Xi, who is also general secretary of the Communist Party of China Central Committee and chairman of the Central Military Commission, made the remark as he sent his congratulations on the beginning of operations on Monday at the first set of power generators at the Wudongde Hydropower Station.

The station spans the Jinsha River in the upper stretches of the Yangtze River and is on the border of Huidong county in Sichuan province and Luquan county in Yunnan province.

Xi extended his regards to all workers, officials and individuals who contributed to construction of the hydropower station, a key part of the national project to transfer electricity from the country's western regions to the more developed eastern areas.

He called on workers to continue to follow a new development philosophy, work toward new heights in science and technology and complete the rest of the project with high standards and high quality to build the station into a topnotch project.

It is also important to protect the Jinsha River Basin during its development so as to bring about more benefits to the people, he said.

A ceremony for the start of operations at the first set of power generators of the hydropower station was held via video link in Beijing and Sichuan and Yunnan provinces on Monday.

China Three Gorges Corp started construction on the hydropower station in December 2015. It is expected to produce 38.91 billion kilowatt-hours of electricity a year after reaching its full capacity in July 2021.