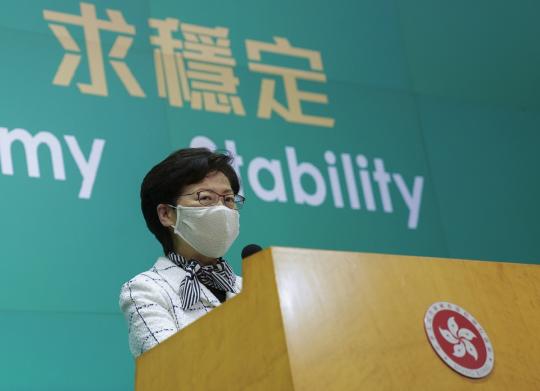 Speaking to reporters before the weekly Executive Council meeting, Lam stressed that the draft law didn't confer her power to appoint a specific judge for a particular national security case. It will be up to the judiciary to decide, as always, Lam said.

According to the draft law, the chief executive was endowed with the right to choose a group of judges to adjudicate national security cases.

Lam noted that there are many foreign judges in the city's judiciary, and there are no particular restrictions on the judges to be designated by the chief executive into the future group to adjudicate national security cases.

In many countries, foreign judges may not be allowed to sit in its judiciary, not to mention dealing with national security-related cases, Lam said.

"The draft national security law for Hong Kong makes no mention of the issue of the judge's nationality. I believed it embodies the central government's high degree of respect and trust in the city's judicial system," Lam said.

It is common practice to designate a group of judges over a certain type of cases in not just Hong Kong but many other places around the globe, Lam said. This does not impair the SAR's judicial independence, she concluded, slamming those opposing the practice for being ignorant.

Lam stressed that each judge of the SAR is appointed on the basis of their judicial and professional qualities, and she has full trust and confidence in each one of them, shall they be appointed to adjudicate national security cases.

Meanwhile, Lam reiterated that the national security legislation doesn't violate the "one country, two systems" principle or the Basic Law.

It is to improve the relevant systems and mechanisms to better safeguard "one country" under the "one country, two systems" principle, Lam noted.

If "one country" is undermined by people who try to endanger national security, the foundation of "two systems" will also be shaken, she said.

Those who still think the legislation is undermining "one country, two systems" are people who never truly accept and respect the concept of "one country", Lam added.