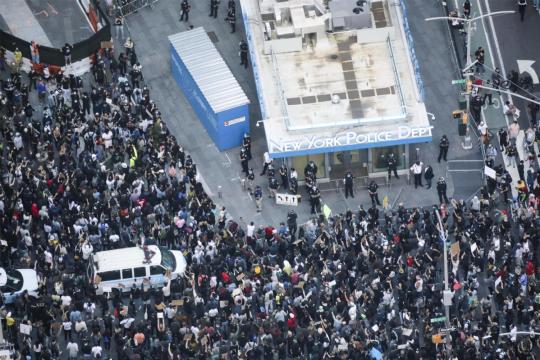 Protesters gather outside the New York Police Department at Times Square in New York City on Sunday. It was the sixth day of protests and violent unrest, sparked by the death of George Floyd, a black man who died in Minneapolis police custody. （WANG YING/XINHUA）

Violent protests continued to convulse cities in the United States over the weekend as officials struggled to restore order, including imposing curfews, amid anger unleashed after the death of a black man in police custody in Minneapolis, Minnesota.

China said on Monday that it hopes the U.S. will eliminate racial discrimination and safeguard the lawful rights of ethnic minorities in the country.

"Black lives matter and their human rights should be guaranteed," Foreign Ministry spokesman Zhao Lijian said at a daily news briefing, adding that racism against ethnic minorities is a chronic disease in U.S. society.

The unrest triggered by the death of George Floyd again reflects "the severity of racism and police violence in the U.S. and the urgency to solve those problems", Zhao said.

China hopes the U.S. will fulfill its obligations under the United Nations' Convention on the Elimination of All Forms of Racial Discrimination and take concrete measures to secure the legitimate rights of ethnic minorities, he said.

Police departments across the U.S. watched patrol cars and other vehicles set ablaze as they confronted lines of protesters. On Sunday, authorities also imposed curfews in the capital, Washington, and other major U.S. cities to prevent fresh rioting.

Washington's mayor ordered a curfew from 11 pm to 6 am as tensions rose between protesters and police outside the White House.

The death of Floyd and racism against African Americans also were strongly condemned in Africa.

African Union Commission Chairman Moussa Faki Mahamat condemned Floyd's death in a statement on Friday, saying, "The AU Commission firmly reaffirms and reiterates its rejection of the continuing discriminatory practices against black citizens of the United States of America."

Saying that the voices against racial discrimination from Africa are a universal consensus of the international community, Zhao said he hopes that the U.S. will listen to the appeal for justice from Africa.

China will stand with and support Africa in opposing all forms of racial discrimination and remarks provoking racism and hatred, he said.

Meanwhile, a New York Times report said that President Donald Trump had been rushed by Secret Service agents into an underground bunker at the White House on Friday night during another protest.

In Philadelphia on Sunday, protesters ransacked stores and set fires. City police said they had made 215 arrests as of Sunday afternoon.

"Deeply saddened by the destruction we saw last night in Center City. In looting downtown, these individuals not only desecrated private businesses, they also desecrated the important message that was heard in the earlier, peaceful protests," Mayor Jim Kenney said on Twitter on Sunday.

The city has announced a curfew between 6 pm and 6 am after a day of protests and looting.

In the New York City borough of Brooklyn, a patrol car being pelted with projectiles on Saturday slowly accelerated through a group of protesters, and Mayor Bill de Blasio called for an investigation of the incident. Also in New York, an officer was recorded roughly shoving a young woman to the pavement after she had approached a phalanx of police, and another was shown lifting the mask of a protester and pepper-spraying him.

In two separate incidents in Brooklyn over the weekend, two lawyers and one young woman were charged with throwing improvised gasoline bombs at police vehicles.

The New York Police Department made 350 arrests on Saturday, while 30 officers were injured. Graffiti was scrawled on St Patrick's Cathedral in Manhattan. Protesters also marched in Times Square on Sunday.

The nationwide unrest started after George Floyd, 46, died on May 25 when a Minneapolis police officer knelt on his neck for almost nine minutes. The officer, Derek Chauvin, has been charged with third-degree murder and manslaughter. He and three other city officers were fired shortly after the incident, which started when Floyd was accused of trying to pass a counterfeit bill at a store.

Trump, who has mostly taken a hard line against the protests in several posts on Twitter, declared on Sunday that a left-wing movement of different groups called antifa was a domestic terrorist organization. Antifa, short for "anti-fascist", was accused by U.S. Attorney General William Barr of infiltrating the protests in various cities and fomenting disorder.

"We are a nation in pain right now, but we must not allow this pain to destroy us," former vice-president Joe Biden, the presumptive Democratic nominee to face Trump in November's election, tweeted on Sunday. "As President, I will help lead this conversation－and more importantly, I will listen, just as I did today visiting the site of last night's protests in Wilmington."

U.S. House Speaker Nancy Pelosi, appearing on ABC's This Week on Sunday, said: "Democratic and Republican presidents alike have seen it as their responsibility to be a unifying force in our country, not to fuel the flame. President Trump has made clear he would rather distract than perform his duty."

Houston Mayor Sylvester Turner said on Sunday that Floyd's body will be returned to the city.

"This is the same city that George Floyd grew up in, and his body will be returning to this city," Turner said at a news conference. "And so the focus needs to be on supporting and uplifting his family."