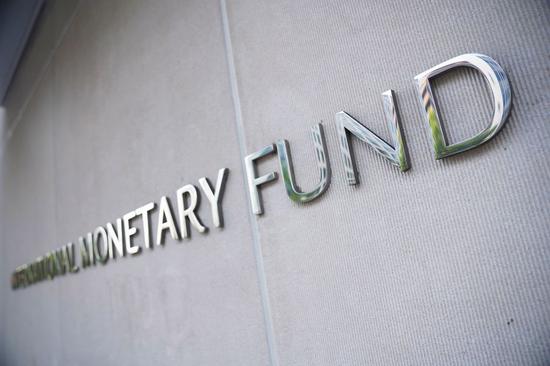 Photo taken on Aug. 9, 2019 shows a view of the headquarters of the International Monetary Fund (IMF) in Washington D.C., the United States. (Xinhua/Liu Jie)

The International Monetary Fund (IMF) said Friday that pandemic-triggered economic crisis is "exposing and worsening financial vulnerabilities" that have built up during the past decade, warning of more instability and a new financial crisis.

After a decade of "extremely low rates and volatility," there are three potential weak spots in the global financial system: risky segments in global credit markets, emerging markets, and banks, two IMF officials wrote in a blog.

"Should the ongoing economic contraction last longer or be deeper than currently expected, the resulting tightening of financial conditions may be amplified by these vulnerabilities, causing more instability or even a financial crisis," the officials said.

The blog, part of a special IMF series on the response to the COVID-19 pandemic, was authored by Tobias Adrian, financial counsellor and director of the IMF's Monetary and Capital Markets Department, and Fabio Natalucci, deputy director of department.

Policymakers should act decisively to contain COVID-19's fallout and support the flow of credit to firms, the IMF officials said, urging regulators to encourage asset managers to be prudent and use all available liquidity management tools to address risks.

"Once the crisis is over, a comprehensive assessment of the sources of market dislocations and underlying vulnerabilities it unmasked should be conducted," they said, highlighting that policymakers should consider whether including nonbanks in the regulatory and supervisory perimeter is warranted, given their expanded role in risky credit markets.

On emerging markets, the IMF officials noted that they saw capital outflows of over 100 billion U.S. dollars since the beginning of the pandemic, nearly twice as big (relative to GDP) as those experienced during the global financial crisis.

Noting that the prolonged period of low interest rates encouraged both borrowers and creditors to take more risks, they said the resulting surge of portfolio inflows into riskier asset markets contributed to the buildup of debt and in some cases resulted in stretched valuations in emerging and frontier markets.

They also suggested temporary capital flow management measures may have to be used in the face of substantial outflows.

On banks, the officials said profitability has been a persistent challenge for banks in several advanced economies since the global financial crisis, noting that extremely low interest rates have compressed banks' net interest margins.

A simulation exercise conducted for a group of nine advanced economies indicates that a large fraction of their banks, by assets, may fail to generate profits above their cost of equity in 2025, according to the blog.

Various strategies to preserve and strengthen capital should be considered, including restricting dividend payouts and share buybacks, they continued, echoing recent remarks by IMF Managing Director Kristalina Georgieva, who urged halting bank dividends and buybacks in light of the COVID-19-induced economic contraction.

In the coming years, authorities will need to take on some of the structural challenges banks face, the two IMF officials said. For example, financial sector authorities should incorporate the potential impact of low interest rates in their decisions and risk assessments. Enditem