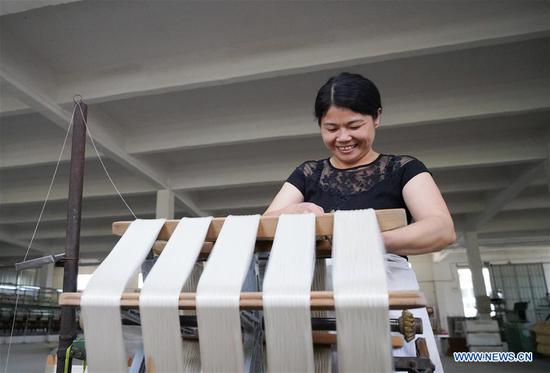 An employee works at a silk company in Le'an County, east China's Jiangxi Province, on May 19, 2020. In recent years, Le'an has been making efforts to promote its sericulture program and planted more than 1,053 hectares of mulberry trees. About 1,400 impoverished households in the county increased their income through the program and shook off poverty. (Xinhua/Hu Chenhuan)

China's success in poverty reduction has demonstrated to the global community that the first goal of "No Poverty" among the 17 Sustainable Development Goals (SDGs) is attainable, a high-ranking United Nations official said Friday.

"China has made impressive achievements in the fight against poverty, which is also a significant contribution to global poverty eradication," he said when commenting on the Government Work Report delivered by Chinese Premier Li Keqiang to the third session of the 13th National People's Congress, the national legislature, in Beijing on Friday morning.

China provides the world, especially the Global South, an example of how economic policies and social policies have managed to take hundreds of millions of people out of poverty, Chediek said.

"The targeted poverty reduction policy implemented by the Chinese Government and focused support to areas of extreme poverty have proved to be effective in eliminating poverty, which also reflects the commitment and indicator of 'leaving no one behind,' as UN calls for, in its achievement of SDGs," said the official.

The UNOSSC director noted that poverty alleviation "is a priority of China and so it is to us in the United Nations. The office has been working with China to support the eradication of poverty through effective and concrete South-South cooperation initiatives."

Among them, the South-South Cooperation Facility for Poverty Eradication is a prominent example. The facility is supported by the Government of China and aims to provide an enabling environment for China and other development partners from the Global South to share their solutions, publicize their demands, and connect to foster south-south cooperation and Triangular cooperation opportunities on poverty eradication, he said.

"Each country has its own goals, circumstances, capacities, and development paths," said Chediek, but adding that based on similar experiences and shared sustainable development goals, sharing good practices among the global South is extremely useful.

"We would expect to see a further expansion of south-south cooperation between China and other Southern countries on the SDG 1," he noted.

All the member states recognize that ending poverty and other deprivations must go hand-in-hand with strategies that improve health and education, reduce inequality, and spur economic growth, while tackling climate change and working to preserve oceans and forests. Enditem