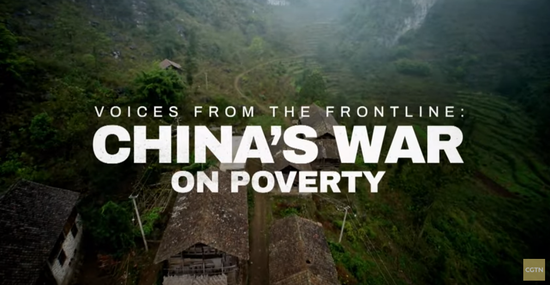 A screenshot of the opening part of the documentary "Voices from the Frontline: China's War on Poverty." (Xinhua)

"We wanted people to be able to appreciate one of the world's great achievements without espousing any particular political ideology," Peter Getzels, an American multiple Emmy-nominated and award-winning documentary director and producer, told Xinhua, after his new work "Voices from the Frontline: China's War on Poverty" debuted online Monday.

Premiering on PBS.org, America's Public Broadcasting Service, it was a poignant and nuanced documentary that revealed a rare, behind-the-curtain glimpse of the inner workings of one the most ambitious public policy programs on the planet.

The U.S.-China co-production, followed five cases from the poverty alleviation plan in China, the huge government program that has pledged to wipe out China's most indigent citizens out of extreme poverty by the end of 2020.

According to a white paper issued by China's State Council last October, from 2012 to 2018, 82.39 million Chinese people had left poverty behind and in 2018 alone, 13.86 million people were no longer impoverished.

Official data showed that per capita disposable income of rural Chinese residents living in poverty-stricken areas reached 10,371 yuan (1,460 U.S. dollars) by 2018, equivalent to 71 percent of that for urban residents.

When Getzels and the documentary's host and writer Robert Lawrence Kuhn, a renowned China expert and recipient of the China Reform Friendship Medal, started this film, the program had already succeeded with raising up over hundreds of million people over the past years, and the clock was ticking on the most intractable final 90 million, who was identified on data by the end of 2016 and tracked regularly.

But more important, to shoot the documentary, a talented team of American and Chinese filmmakers were granted unprecedented access to travel across China, talking to villagers, officials, and independent evaluators alike, to see firsthand how the poverty program was faring and to determine what makes it tick.

Getzels saw the beating heart behind the statistics by following Chinese families struggling to find a way out of poverty and the cadre workers helping them.

"We let people like the young girl tell her own story. She was so genuine and her concern about her parents, her desire to be better, her pride in what she's accomplished becomes a universal story in a beautiful way and reaches across all cultures," Getzels explained to Xinhua.

"It doesn't matter if you are Chinese, American, English or anything else - it connects to people," he affirmed.

Viewers also see the predominantly fresh young idealistic caseworkers tasked with living in the villages they serve for years, sleeping on concrete floors, often with no flush toilets or electricity.

"The young party members who work with these poverty-stricken families really care about them and their work. It wasn't just a career move, that was touching to see." Getzels told Xinhua.

The system the film documents is a remarkable one that registers every single impoverished individual and family in China with their local village office of the poverty alleviation program - hundreds of millions of people.

But it gets even more challenging. With a nod to prudent western financial planning, these families don't receive government handouts. Instead, their caseworkers help them to develop their own individualized business plan to increase their incomes.

From creating micro-businesses like embroidery and garment-making, mushroom huts and bamboo plantations, co-ops for selling fruits and other locally-produced products on line, etc., these are real world incarnations of the old adage.

In China, the poor are learning to "fish."

"So, no matter what your political orientation is, you can connect with the people in this film, see them working together to try to work things out, and empathize with what they're going through." Getzels said.

"There is nothing more important in the world in terms of global equality than poverty alleviation and in that regard, China's poverty alleviation program is a remarkable one," Kuhn told Xinhua. "It shows how much their government actually cares for their people."

"This is one of the most extraordinary accomplishments of social-engineering in human history," he noted.

"People wonder how they have been able to pull it off and this documentary chronicles the interesting and effective approaches of how they've accomplished it," he told Xinhua, and hoped parts of it might be adapted to work elsewhere around the world.

"The system that effectively contained the coronavirus in China is the same system that has been able to eliminate extreme poverty in a little over a decade. There is no better way to understand how China works than to understand their poverty alleviation program," advised Kuhn. "They both take national commitment and the massive mobilization of resources."

Director Getzels also felt the fruitful give and take of the American and Chinese filmmakers, including executive producer Adam Zhu and Liu Cong, producer Liu Changying, working together to make the documentary was an important part of the process.

"We communicated well enough verbally, but the language of cinema became our universal language. It was very rewarding overall and I'd love to do it again," he told Xinhua.

While Getzels brought his vision and international sensibilities on what global audiences want to see in documentaries, he credits his director of photography, Ning Nan, with being a "very deep person who brought sensitivity and depth to his camera work," and he sang the praises of his other Chinese colleagues and his longtime collaborator, American editor, Catherine Shields, calling her "a masterful editor of Oscar-winning films." Enditem