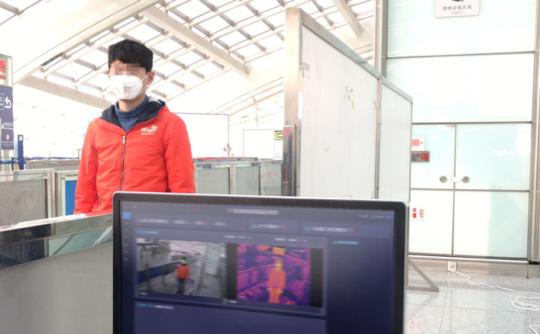 SenseTime's AI products are used in the Beijing Capital International Airport to rapidly detect people who have a fever among those in a crowd. (Photo provided to chinadaily.com.cn)

Artificial intelligence has played a "major and unique" role in tackling the COVID-19 outbreak in China, ranging from patient tracking to logistical support to traffic management, a senior science official said on the weekend.

AI has also been used in epidemiological research, drug design and risk management, further cementing the technology's application in improving efficient governance and modernizing all aspects of society, Li Meng, vice-minister of science and technology, said during a news briefing on Saturday.

"The next generation of AI technology will be a great project for our 2030 goals," he said, adding that conducting basic research into theory and algorithm design and obtaining related core technologies will be the focus of China's efforts.

The two sessions are plenary sessions of the National People's Congress, the nation's top legislature, and the National Committee of the Chinese People's Political Consultative Conference, the top political advisory body.

During the two sessions last year, the ministry submitted over 849 proposals related to science and technology from deputies to the NPC and members of the CPPCC national committee, Li said.

According to the proposals, the scientific fields that would see greater support are stem cell research, nanotechnology, proteomics, synthetic biology, etiology, climate change, quantum computing and communication, brain science and others, he said.

Mathematics, physics and other basic sciences have received greater support than before, with 13 new national-level applied math centers being established in Beijing, Shanghai and Tianjin municipalities as well as Guangdong and Shandong provinces, Li said.

"Through these centers, we hope the world's top mathematicians can conduct more long-term studies," he said.