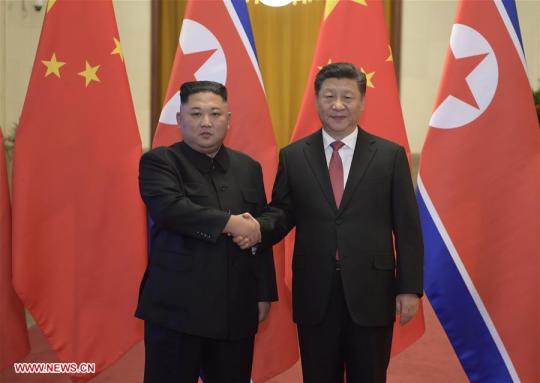 President Xi Jinping has expressed his confidence in securing a final victory in the fight against the COVID-19 pandemic with the joint efforts of China and the Democratic People's Republic of Korea as well as the international community.

He said China is willing to enhance cooperation with the DPRK on epidemic control and provide support within its capacity in accordance with the DPRK's needs.

Under the firm leadership of the CPC Central Committee, China has achieved significantly strategic results in its epidemic control work through arduous efforts, Xi said, adding that he was also concerned about the situation of epidemic control in the DPRK and the health of its people.

He said he felt gratified and pleased that Kim has guided the WPK and the DPRK people to adopt a series of anti-epidemic measures that have led to positive progress.

Saying that he was glad to receive the warm and friendly verbal message from Kim, Xi also recalled that Kim had sent him a letter of sympathy over the COVID-19 outbreak in February and provided support for China to combat the virus.

This has fully reflected the profound bond of friendship that Kim, the WPK, the DPRK government and its people share with their Chinese counterparts, and it is a vivid illustration of the solid foundation and strong vitality of the traditional friendship between China and the DPRK, Xi said, expressing his deep gratitude and high appreciation.

Noting that he highly values the development of China-DPRK relations, Xi said he will work with Kim to guide related departments of both parties and countries to implement the important consensuses between the two sides, strengthen strategic communication and deepen exchanges and cooperation.

By doing so, the two neighbors can constantly push forward the development of China-DPRK relations in the new era, bring more benefits to both countries and their people, and make positive contributions to regional peace, stability, development and prosperity, Xi added.

Kim has paid four visits to China since March 2018. As last year marked the 70th anniversary of diplomatic ties between the two countries, Xi paid a two-day visit to Pyongyang in June, the first visit by the CPC general secretary and China's president in 14 years.

In his verbal message sent to Xi on Thursday, Kim highly appreciated and congratulated Xi on leading the CPC and the Chinese people in making splendid achievements and securing a great victory in the battle against the epidemic.

He said he firmly believed that under Xi's leadership, the CPC and the Chinese people will surely win a final victory.

Kim also wished Xi good health, extended greetings to all CPC members, and expressed his hope that relations between the WPK and the CPC will grow closer and enjoy sound development.

As of Sunday, more than 3.9 million people in the world have been infected with COVID-19, and over 274,000 people died, according to the World Health Organization.

Pak Myong-su, director of the anti-epidemic department of the DPRK's Central Emergency Anti-epidemic Headquarters, told Agence France-Presse last month that the country's strict containment measures had been completely successful and no single person was infected.