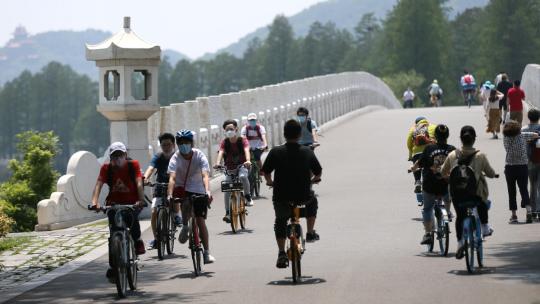 Cyclists and pedestrians traverse a bridge at East Lake on Sunday in Wuhan, Hubei province, the hardest-hit region from the COVID-19 pandemic in China. Locals enjoyed their first public holiday since the monthslong regional lockdown was lifted.[Photo by Zhou Guoqiang / For China Daily]

Twenty-two major tourist attractions that reopened in Hubei province, the hardest hit region by the COVID-19 contagion in China, had received 520,400 visitors from Friday to Sunday, as people enjoy their first public holiday since the regional lockdown was lifted.

Although numbers were down significantly year-on-year, the tourism market is gradually recovering in the province as pandemic control measures are still in place.

According to the provincial culture and tourism bureau, the number of visitors received was down 83 percent year-on-year between Friday and Sunday, while tourism revenue plunged 94.5 percent to 30 million yuan ($4.2 million).

To avoid overcrowding and protect against risks of potential infection, the bureau earlier said that tourists should make bookings before visiting local scenic sites, and tourist flow should be limited to no more than 30 percent of the maximum capacity.

In the province's capital Wuhan, around 178,000 visits were made at the city's 21 A-level tourist attractions on Saturday, down 58 percent from a year earlier, the bureau said.

Wuhan's landmark Yellow Crane Tower received around 1,000 visitors on Saturday, only 18.5 percent of its daily maximum capacity, said the bureau.

The province lowered its novel coronavirus emergency response level from the highest to the second-highest level on Saturday, with adjustments to prevention and control measures also instituted.

To revitalize the province's tourism sector, the provincial government established special funds of 100 million yuan to help tourism-sector enterprises influenced by the pandemic, said a notice issued on Friday.

Enterprises and government institutions are encouraged to give their employees a half-day extra vacation each Friday this summer to boost the tourism sector, the notice said.

Medical workers around the country who came to aid the province's fight against the contagion can bring three family members to the province and enjoy free admission to any tourist attraction for the rest of their life, it added.

Han Street, a major shopping district in Wuhan, now has most of its shops open, but the number of visitors is still significantly lower than before the pandemic.

The district requires visitors to wear surgical masks, have their temperature checked and show a green health code before entry.

Jiao Huirong and two of her friends visited Han Street on Saturday to get some fresh air after staying at home for more than three months.

"It's the first time we got together since the outbreak started, and we really missed each other," Jiao said.