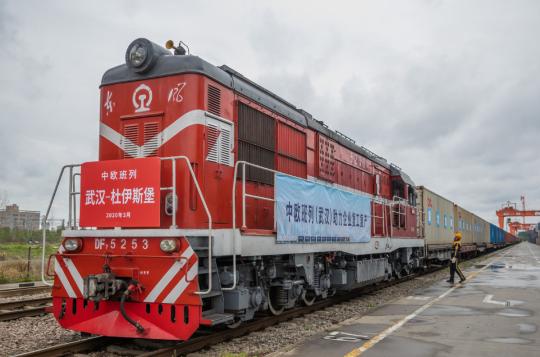 China-Europe freight rail service has hit a monthly record high in April as it plays a bigger role in maintaining the global supply chain amid the novel coronavirus pandemic, according to the country's top railway operator on Saturday.

A total of 2,920 trips were made during the past four months, and 262,000 standard-sized shipping containers were transported between the two regions, which saw a 24 percent and 27 percent year-on-year increase respectively, the company said.

The stable operation of China-Europe cargo trains has remained a reliable transportation channel connecting China, Europe and countries involved in the Belt and Road Initiative, displaying its strategic value of ensuring the international supply chain amid the escalating situation of the novel coronavirus outbreak worldwide, the company said.

Since the first train carrying medical supplies departed from the eastern Chinese city of Yiwu on March 21, the China-Europe freight trains have transported 3,142 tons of epidemic prevention materials to countries such as Italy, Germany, Spain, Czech Republic, Poland, Hungary and Netherlands by the end of last month.

The China-Europe rail service is considered a significant part of the Belt and Road Initiative, and is expected to boost trade between China and Europe.