New version of Long March to make its debut 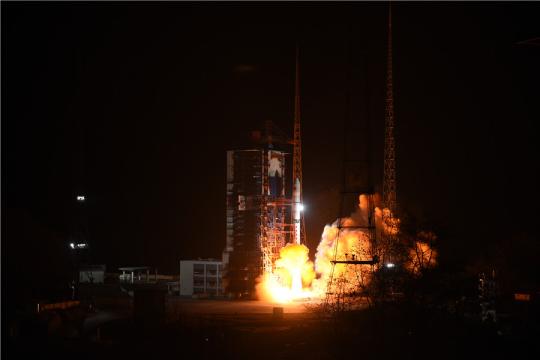 China's Long March 5B carrier rocket is scheduled to make its debut flight later this month at the Wenchang Space Launch Center in Hainan province, according to the China Manned Space Agency.

The agency recently published a picture of the first Long March 5B that has been assembled inside a colossal building, indicating the giant rocket is ready for the maiden mission.

The coming flight will send the first prototype of the country's new manned spaceship into orbit to verify that the design of the rocket and the spacecraft are suitable, the agency said.

The rocket was transported to the launch center in February by two rocket transportation ships－Yuanwang 21 and Yuanwang 22-from Tianjin, a northern coastal municipality that is home to the rocket's manufacturing complexes, and has been undergoing tests and prelaunch preparations since then.

According to the China Academy of Launch Vehicle Technology in Beijing, the leading rocket developer in the country, Long March 5B is the first variant of the Long March 5, which conducted its third mission at the Wenchang center in December.

The new model will be tasked with sending large spacecraft to low-Earth orbit, the academy said in a statement.

A Long March 5B is 53.7 meters long, with a diameter of 5 meters. It will be propelled by liquid oxygen, liquid hydrogen and kerosene and will have a liftoff weight of about 849 metric tons.

Li Dong, the rocket's chief designer, said that the craft will be pollution-free and will be the most powerful rocket when it comes to carrying capacity to low-Earth orbit, capable of placing 22 tons of payload into such orbit.

The China Manned Space Agency said the new-generation manned spaceship has a total length of 8.8 meters and a liftoff weight of 21.6 tons. It will be tasked with serving the construction and operation of China's future space station as well as the country's manned lunar missions being planned by scientists, the agency noted.

Yang Qing, chief structural designer of the spacecraft, said: "This coming mission will serve to examine and demonstrate the new spaceship's re-entry, heat-resistance and recovery technologies and will lay a solid foundation for the improvement of the spaceship's design."

Compared with the Shenzhou series, the country's operational crewed spacecraft family, the new generation of manned spaceship will be capable of conducting longer missions and operating in a hotter environment, he noted.

Furthermore, it will be able to carry three astronauts and as much as 500 kilograms of cargo into space. It will also be able to bring items back to Earth from the space station, Yang said, adding that its re-entry module will be reusable.