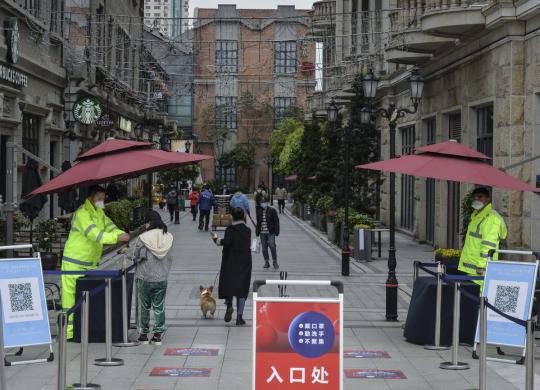 A customer uses a travel history QR code to get her temperature checked at the entrance of a commercial street in Wuhan, capital of Hubei province, on March 30. (Photo by Hu Dongdong/Changjiang Daily)

Wuhan will continue to enforce strict controls on residential communities to prevent a rebound of the novel coronavirus after the capital of Hubei province was reconnected with the outside world on Wednesday.

Authorities across Hubei should continue existing epidemic control measures aimed at communities, including identity recording and body temperature tests of all people entering or exiting residential areas, and ensuring that everyone wears a mask, according to a notice released by the provincial government on Tuesday night.

Strict epidemic control measures should also apply to all sorts of venues open to the public, such as shopping malls and parks, to prevent cross-infection, while schools ranging from kindergartens to colleges in Hubei will continue to postpone reopening, the notice said.

The notice also appealed to residents to refrain from going outside their communities unless necessary, and said they should wear a mask in public places, to contribute to the final victory over the disease.

Wuhan has been the Chinese city hardest hit by the outbreak. As of the end of Tuesday, it had reported more than 50,000 confirmed cases, accounting for more than 60 percent of all cases on the Chinese mainland. But the number of new cases in the city fell to single digits in mid-March and has remained at zero or single digits since.

"Epidemic control in Wuhan is facing uncertainties and complex challenges due to causes such as changes in the international epidemic situation and reopening to the outside world," Hu Shuguang, deputy head of Wuhan's epidemic control headquarters, said on Tuesday.

While optimizing physical barriers in communities to facilitate residents going to work, screening efforts will be emphasized for cases that might otherwise not be detected.

"We do not have enough knowledge of the novel coronavirus yet, and the appearance of asymptomatic cases and people who tested positive again after recovering has added to complexity of disease control and prevention," said Tao Cunxin, chief for community epidemic screening for Wuhan's epidemic control headquarters.

Epidemic screening in Wuhan also will target more key groups including people working outdoors or in a crowded environment, those who had finished the quarantine period outside Wuhan and people coming from overseas, he said.

Chen Hongxing, an official from Dongxihu district in Wuhan, said following the end of Wuhan's lockdown, some business such as restaurants will be reopened to meet the demand of residents.

However, epidemic control measures at the communities will not be loosened in the near future, he said.

Zhao Wei, in charge of property management at a local community, said with the recent resumption of production in the city, the number of people entering or exiting the community has surpassed 100 a day, posing difficulties for epidemic control.

"We have to keep on explaining to residents that they still cannot go out at will, although the city lockdown has been lifted," he said.