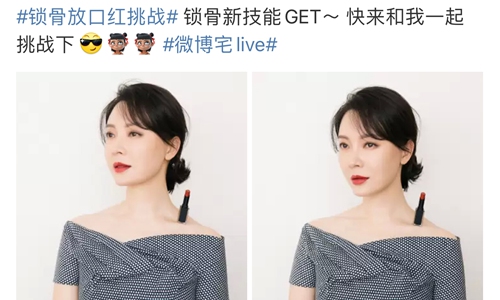 A new China body image trend is sweeping Chinese social media after a Chinese actress launched a new collarbone challenge, which is standing a lipstick container on her collarbone, on her Sina Weibo account.

The actress Chen Shu posted four photos showing an open red-colored lipstick on her collarbone. "Get a new skill of collarbone, come and join in the challenge with me," she wrote on her Weibo on Monday night.

The hashtag of putting lipstick on the collarbone has earned 170 million views on Weibo as of Tuesday.

Hundreds of thousands of Chinese netizens who follow the actress posted similar photos to show how sexy and skinny they are.

Some netizens complained that standing a lipstick is far more difficult than placing it horizontally, and some are proud that they could hold their lipstick in place for a while. Those who couldn't and had their opened lipstick fall, expressed shame.

However, some Chinese netizens are opposed to the challenge, saying it's offensive.

"I think it is a very meaningful thing to use celebrity to launch a network-wide activity, like the previous ice bucket challenge. But this collarbone challenge is useless and will only deepen people's beauty stereotypes about women, which is having a thin waist, deep collarbones, and long legs," Wu Yu, a 26-year-old white-collar worker living in Beijing told the Global Times on Tuesday.

The new challenge followed a series of similar controversial Chinese body image trends including the A4 waist challenge (measuring women's waists against a piece of A4 paper which is 21 centimeters wide), the belly button challenge (reaching one's belly button from behind), and the coin collarbone (balancing coins on people's collarbones for as long as they can) which once faced heavy criticism worldwide on social media.

According to Wu, this latest challenge is misleading to the public and society. Those who cannot do it will get frustrated, be disgusted with themselves and have a psychological burden. And those who do it will show off and then pursue the sick body shape further. Eventually, the society's aesthetics will become ill.

"Personally, I think the actress is a victim of so-called beauty standards, and she does not realize she, as an influential celebrity in China, is spreading a sick value to society," said Wu.

Meanwhile, the most important thing is not necessarily being slender but being healthy. Having a skinny body does not mean you are healthy, she added.

The world is made up of different body types, "you are exactly the way you are supposed to be."