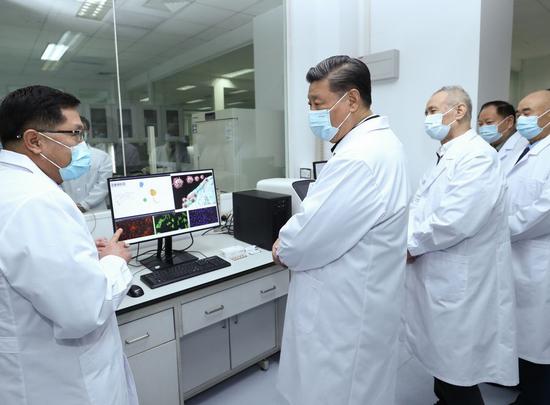 Chinese President Xi Jinping, also general secretary of the Communist Party of China Central Committee and chairman of the Central Military Commission, learns about the progress on the COVID-19 vaccine and anti-body during his visit to the Academy of Military Medical Sciences in Beijing, March 2, 2020. (Xinhua/Ju Peng)

As China is fighting a tough war against the novel coronavirus disease (COVID-19) outbreak, Chinese President Xi Jinping has underscored international cooperation in scientific research guided by the vision of a community with a shared future for humanity.

Public health security is a common challenge faced by humanity, and all countries should join hands to cope with it, said Xi during an inspection in Beijing on Monday, calling on countries to share research data and jointly work out response strategies.

Since the outbreak of the epidemic, China has actively cooperated and exchanged information with the World Health Organization (WHO) and other countries.

According to a WHO-China Joint Mission on the COVID-19, full genome sequences of the new virus were shared with WHO and the international community immediately after the pathogen was identified on Jan. 7.

"The epidemic is a devil. We will not let it hide," said Xi when meeting with WHO Director-General Tedros Adhanom Ghebreyesus in Beijing on Jan. 28.

Chinese researchers have also been actively sharing their latest study results and participating in international cooperation on diagnosis and effective treatments.

After receiving the genome sequence of the virus from China, researchers in the United States were able to map the first 3D atomic-scale structure of a key 2019 novel coronavirus protein, making a breakthrough toward developing vaccines, therapeutic antibodies and diagnostics, according to a study published online in the journal Science in February.

Noting that the COVID-19 outbreaks have emerged in many countries, Xi on Monday said it is important to step up communication and exchange with the WHO and carry out scientific research cooperation on source tracing, drugs, vaccines, testing and other fields with other countries, especially those hit hard by the virus.

The WHO-China joint mission, consisting of 25 experts from eight countries and the WHO, conducted a nine-day field study trip on COVID-19 last month in China's capital Beijing and several different provinces including Hubei, the epicenter of the outbreak.

The team made a range of findings on the transmissibility of the virus, the severity of the disease, and the impact of the measures taken. They offered 22 recommendations on COVID-19 control for affected and unaffected countries, the international community as well as the public.

The Russian government also sent experts to China to work with their Chinese counterparts on epidemic response.

Besides the government level, Chinese academics and the business community have also taken an active part in the international cooperation on COVID-19 scientific research.

A team led by renowned Chinese respiratory specialist Zhong Nanshan is working with foreign scientists on tracing of the virus source, its transmission routes as well as building of the animal model for experiments, among others.

In late February, Jack Ma Foundation announced that it will provide 15 million yuan (around 2.1 million U.S. dollars) to support international cooperation on the development of antiviral drugs or antibodies to fight the epidemic.

"To prevail over a disease that threatens all, unity and cooperation is the most powerful weapon," Xi wrote in a reply to a letter from Bill Gates, co-chair of the Bill & Melinda Gates Foundation.